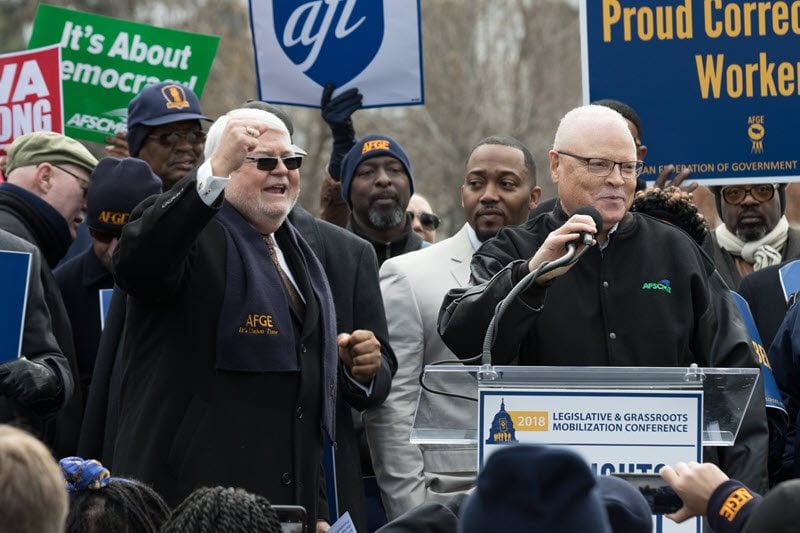 WASHINGTON – The American Federation of Government Employees has gained a powerful new ally in our fight against the Trump administration’s efforts to deny federal workers their legal right to representation at the worksite.

“AFSCME filed a motion to intervene in our lawsuit with our consent,” AFGE General Counsel David Borer said. “We’re happy they’ve joined our case and we thank them for their support. Together the nation’s two largest public employee unions are presenting a united front in opposition to the White House’s latest attack on working families and union rights.”

AFGE, the largest union representing federal government workers, sued the Trump administration on May 30 in response to an executive order President Trump issued May 25 that impedes employee representation at the job site. AFGE’s lawsuit challenges the executive order as violating the right to freedom of association guaranteed by the First Amendment, and as exceeding the president’s authority under the Constitution of the United States.

AFSCME’s motion to join our lawsuit was filed June 1 in U.S. District Court for the District of Columbia.

“By instructing a federal agency to bargain in bad faith with its own workers, Trump has not only disrespected the people who take pride in keeping our country safe and healthy, he has also instructed his government to break the law and violated his own constitutionally mandated duty of care,” AFSCME President Lee Saunders said in a statement. “Public service workers in our federal government are dedicated to improving America’s communities and they faithfully execute the laws of our country every day. We demand that the president of the United States be held to the same standard.”

The executive order at issue in AFGE’s lawsuit is one of three directives from President Trump that chip away at due process and collective bargaining rights for federal employees.

“These executive orders strip agencies of their right to bargain terms and conditions of employment and replace it with a politically charged scheme to fire employees without due process,” AFGE National President J. David Cox Sr. said.