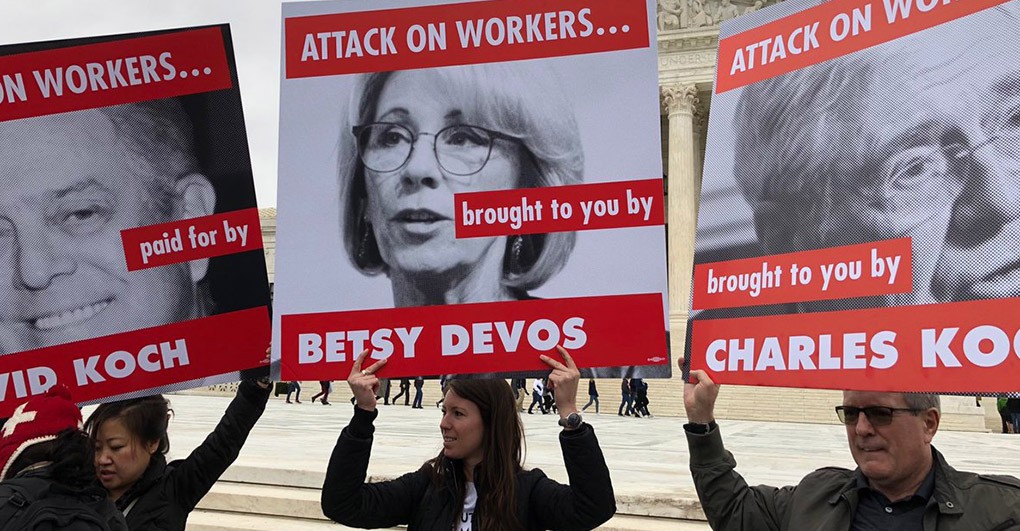 WASHINGTON – The Department of Education’s ability to effectively serve students, teachers, and taxpayers is suffering as Secretary Betsy DeVos continues to wage war on her own workforce, says the union representing nearly 4,000 Education employees.

The American Federation of Government Employees, which is the exclusive representative for Department of Education workers nationwide, says Congress needs to take a close look at Secretary DeVos’ sweeping restructuring plan for the agency, which is being pushed through even as the department continues to break the law by enforcing policies that violate workers’ rights.

“Betsy DeVos is hellbent on destroying the Department of Education from the inside out,” AFGE National President J. David Cox Sr. said.

“First she trashed our labor contract – eliminating commonsense policies that promote telework and continual learning, preventing employees from resolving workplace grievances or management concerns, and evicting union representatives from the worksite,” Cox said. “Now she is pushing through a sweeping reorganization that will result in many employees being displaced or moved into other jobs without the proper training or experience.”

In July, an investigator with the Federal Labor Relations Authority found merit in the unfair labor practice charge that AFGE filed in March after Education Department management walked away from the bargaining table and imposed its own illegal management edict. Yet the department has refused to comply with the FLRA’s finding, which cannot be enforced due to the agency’s vacant General Counsel position.

The tactics being used by Secretary DeVos and her management team to gut employees’ rights and union protections are even more severe than what was later proposed in President Trump’s three anti-worker executive orders, the bulk of which were overturned by a federal judge in August.

“Secretary DeVos is undeterred and single-minded in her quest to decimate the Department of Education by making the agency such a miserable and untenable place to work that even the most dedicated employees will quit,” Cox said. “We need Congress to step in now before more harm can be done.”

“When you make it harder for employees to come to work and do their jobs by taking away telework and flex schedules, when you fail to honor labor agreements providing for child care and employee training, and when you attempt to silence employees from reporting discrimination or sexual harassment, you create a toxic climate that is making it very difficult for employees to effectively do their jobs,” Cox said.