EPA Union, Members of Congress, and Coalition Partners Call on Trump to Support the EPA

AFGE: EPA employees have dedicated their careers to serving the American public and believe in their mission 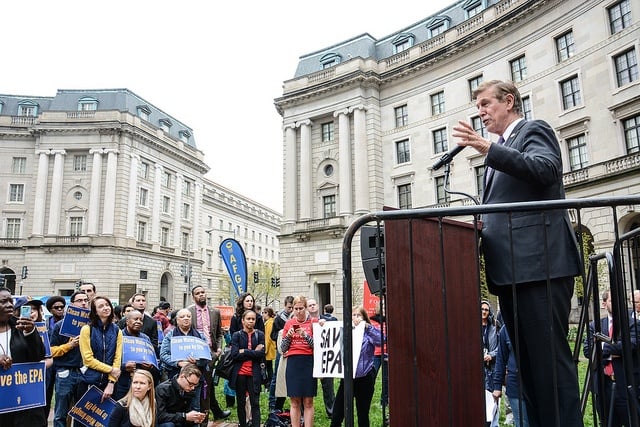 WASHINGTON – After more than a year of attacks and cuts aimed at the Environmental Protection Agency, the American Federation of Government Employees has called on President Trump to support the workers and the mission of the only agency charged with keeping our air and water clean and safe.

Today, AFGE hosted a “Support the EPA” rally outside EPA headquarters and was joined by members of Congress, fellow union members, coalition partners, and concerned citizens of the community. With chants of “Boot Pruitt” led by some members of Congress in attendance and strong vocal support for the men and women of the EPA, the message was clear.

“You are the EPA, not Scott Pruitt,” said Rep. Dan Kildee of Michigan, emphasizing the support Congress and the American people have been offering to public servants at the EPA; and how their work and mission supersedes the malfeasance of Administrator Pruitt.

AFGE District 14 National Vice President Eric Bunn echoed that sentiment telling the crowd: “We’re here today because since President Trump came into office, our environment and your agency has been under attack,” adding, “the work you do saves lives, and we must stand up today to fight for you.”

“We’ve seen critical protections and safeguards for our air and water repealed so corporations can pollute freely and without fear of any repercussions, and we’ve seen regulations protecting our children from toxins rolled back so these same corporations can make a buck,” said Bunn.

Bunn and AFGE discussed the removal of public servants who questioned spending, and the stated intent of the administration to undo the work done by the EPA as a call to action. “We cannot stand idly by while the EPA faces unnecessary cuts and a lack of support for their life-saving work,” Bunn said.

These calls were echoed by Reps. Don Beyer of Virginia, Salud Carbajal of California, Bill Foster and Mike Quigley of Illinois, Ruben Gallego of Arizona, Sheila Jackson Lee and Debbie Wasserman Schultz of Florida, Dan Kildee of Michigan, Alan Lowenthal of California, Grace Meng of New York, and Jamie Raskin of Maryland, as well as by representatives from Green Latinos, the Sierra Club, the Environmental Integrity Project, the Hip Hop Caucus, and Moms Clean Air Force.

Rep. Meng agreed, saying, “Your life-saving work is critical for our nation’s health, safety, and environment. Your dedication as public servants is necessary to address so many issues like water pollution around the country to pesticide used on the food that we eat.”

AFGE, which represents more than 9,000 working people at the EPA, firmly opposed Pruitt’s nomination last year due to his stated intent to dismantle the agency and numerous lawsuits against their work. And in the year since has pushed back on proposed budgetary and staffing cuts, as well as the regulatory rollbacks undoing years of hard work.

“The last 16 months have been hard. I have never, in all my years of public service at the EPA or with the Marines, seen morale this low,” said AFGE Local 3331 President Nate James who represents EPA employees in DC.

“The working people who came to work here at the EPA did so because they believed in our mission. They wanted to keep our air and water safe and clean, so future generations can enjoy them,” James said, adding, “But this administration has shown nothing short of disdain for our workers and work and it’s time for that to change!”