“Federal employees earn a living wage and benefits – and that’s nothing to apologize for.” 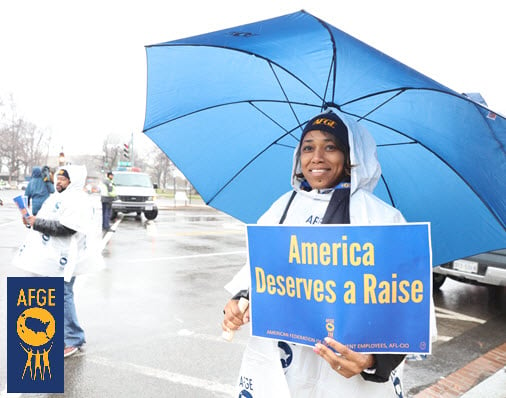 WASHINGTON – Criticizing the pay and benefits earned by federal government employees detracts from the real crisis facing tens of millions of private-sector workers who don’t earn enough to live on and lack basic benefits like health insurance and retirement, says the head of the largest federal employee union.

“Federal employees earn a living wage and benefits – and that’s nothing to apologize for,” said J. David Cox Sr., national president of the American Federation of Government Employees.

“I’m proud that the federal government provides affordable health care to the nurses who care for our veterans and a modest pension to the Border Patrol agents who risk their lives to keep drug runners and terrorists out of our country,” Cox said. “If more private-sector employers followed the government’s model, millions more workers would make enough to care for themselves and their families, have access to affordable and quality health care, and be able to save for retirement.

“Instead, many full-time workers must rely on public assistance programs like food stamps, Medicaid, and subsidized housing just to survive – while corporate executives and shareholders earn record profits.”

The average chief executive officer from private-sector companies on the S&P 500 Index was paid $13.1 million last year – 347 times more than the average rank-and-file worker, and a six percent increase from the previous year, according to a recent data analysis by the AFL-CIO.

“Most federal employees are paid a modest salary that’s actually less than what they would earn doing comparable work in the private sector,” Cox said. “Where federal workers come out slightly ahead is in the benefits they are offered – including health insurance, a defined benefit pension, and a defined contribution retirement – although these benefits are becoming less generous by the year, as health care costs rise and Congress requires workers to shoulder more of cost of their retirement plans.”

A recent update to the Congressional Budget Office’s 2012 comparison of federal and private-sector compensation relies on the same faulty assumptions as its earlier report, resulting in highly politicized and inaccurate assumptions.

CBO’s conclusion that federal employees are overpaid relative to the private sector is based almost exclusively on education, whereas wages and salaries for most federal jobs are based on duties and not educational attainment or factors such as age, race, or gender.

This results in many federal jobs being inaccurately compared to private-sector jobs that have similar educational requirements but different levels of responsibility and duties, said Jacque Simon, AFGE’s public policy director, in testimony before the House Oversight and Government Reform Committee on May 18.

For instance, correctional officers guarding dangerous inmates in federal prisons may be lumped with generic security guards at malls, while VA nursing assistants caring for wounded warriors with traumatic brain injuries may be grouped with office assistants calling in prescriptions to pharmacies.

“The CBO study on federal pay does a great disservice to those who seek objective analysis on questions related to federal pay and benefits,” Simon testified.

The CBO study ignores scientific analysis by the government’s own wage experts to draw misleading conclusions that are useful only to those who want to cut wages and benefits for the federal workforce.

“Rather than fault the federal government for providing its workers with living wages and basic benefits, we should call on corporate America to be more like Uncle Sam,” Cox said.