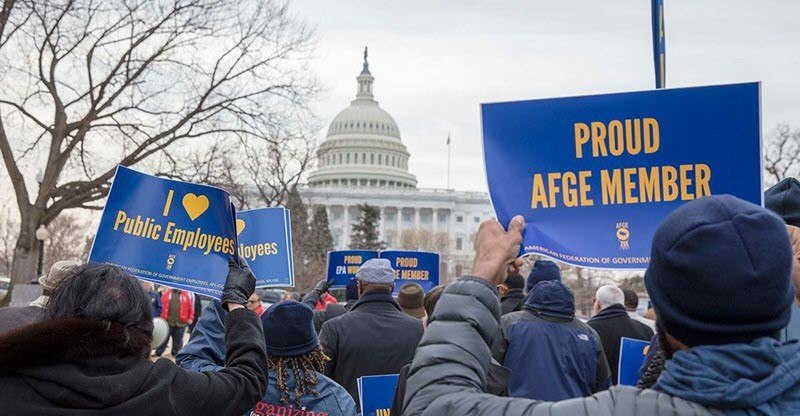 “The threat of a year-end government shutdown has been averted now that both houses of Congress have passed and the president has signed legislation that funds federal agencies for the rest of fiscal 2020.

“2019 began in the midst of the longest-ever government shutdown, yet the year is coming to a close with passage of bipartisan appropriations and authorization bills that demonstrate Congress’ support for federal employees and the work they do on the nation’s behalf every day.

“The fiscal 2020 National Defense Authorization Act signed into law by the president will provide all federal employees with 12 weeks of paid time off for the birth, adoption, or foster placement of a child. AFGE members lobbied for decades for this new benefit, which will help new parents better balance their work and home lives and give agencies a needed advantage when recruiting and retaining workers.

“The spending bills passed by Congress provide both hourly and salaried federal workers with an average 3.1% pay raise – the largest increase in 10 years – which will help narrow local pay gaps with non-federal employees.

“We are also grateful that the approved budget permanently ends the so-called ‘Cadillac Tax’ on high-cost health plans. We strongly supported repeal of this regressive tax, which would have disproportionately affected federal employees and retirees who have the highest health risks by making their health insurance plans far less affordable.

“The spending bills also rejected most of President Trump’s proposed budget cuts to non-defense agencies, raising discretionary spending by $44 billion. This will allow for the hiring of needed staff at the Social Security Administration, State Department, and other agencies.

“We thank the leadership in the House and Senate for working together in a bipartisan fashion to complete these bills, which will further the federal government’s critical work on behalf of everyone who calls this great nation home.

“AFGE specifically thanks Congressman Gerry Connolly and Senator Brian Schatz for their leadership in ensuring that federal employee pay keeps pace with the cost of living and private-sector employers through their FAIR Act legislation. We also thank Senator Schatz and House Oversight and Reform Chairwoman Carolyn Maloney for their leadership in getting paid parental leave across the finish line, and Majority Leader Steny Hoyer for leading the charge to restore the longstanding tradition of parity between military and civilian pay increases.”