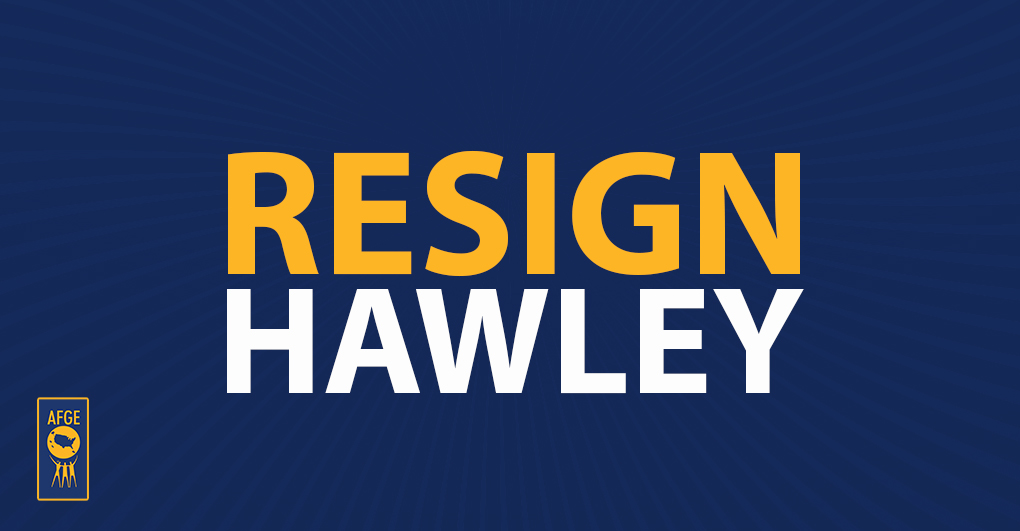 Missouri AFGE members: “Josh Hawley does not speak for us.”

WASHINGTON – Today, the American Federation of Government Employees, AFL-CIO (AFGE),  the largest union representing 700,000 federal and D.C. government employees, held a protest calling for the resignation of Senator Josh Hawley, following his encouragement and incitement of a pro-Trump, anti-democracy assault on the U.S. Capitol that resulted in the deaths of six Americans.

“This is a man who has deep knowledge of the law. He’s a Yale Law School grad.  He knows what is lawful and what is unlawful. And he threw his support – very public fist of support – behind those with no respect for the law,” AFGE National President Everett Kelley said to an assembled group outside Hawley’s St. Louis district office earlier today. “Josh Hawley has blood on his hands, and he is entirely and completely unrepentant. He is not fit to represent the good people of Missouri because he has chosen to instead represent the worst of America – the violent, fascist, thugs who desecrated our democracy on January 6 and every day since.”

“We are protesting to protect our democracy and hold our elected officials accountable. We’re here to let it be known that Josh Hawley does not speak for us,” said AFGE Local 2192 President Keena Smith, representing Veterans Benefit administration employees in St. Louis. “Josh Hawley has stated that he ‘acted in the interests of Missourians.’ This is 100 percent untrue. He acted in the interests of himself. This was his shot to cozy up to Trump’s base ahead of his 2024 presidential run. He is selfish man who exploited the lies of Donald Trump and he must resign now.”

“Josh Hawley is a dangerous, remorseless man whose lies led to the deaths of six people. He lied to his and President Trump’s supporters, and they believed him when he said they should do everything in their power to overturn a democratic election,” added Jonay McCall, AFGE Local 96 President at the VA Medical Center in St. Louis. “Regardless of what action they take, Joe Biden and Kamala Harris will be our next president and vice president, and Josh Hawley knows that. His actions were reckless and inexcusable, and he has lost his privilege to represent the people of Missouri. He must resign now.”

The deadly attack on the U.S. Capitol began as a Trump rally held in support of efforts by Hawley and others to disrupt the certification of the Electoral College process through baseless objections. Senator Hawley was a staunch supporter of the efforts to overturn a legitimate, democratic election and was extremely vocal about his decision to object during the certification process, citing baseless and false allegations aimed at creating confusion and division among the American people. He was photographed outside of Capitol with his fist in the air, showing solidarity with the perpetrators before violence erupted.