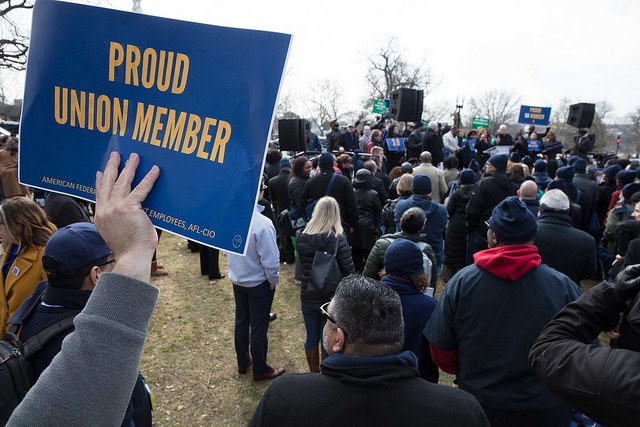 WASHINGTON – This week, Cleveland-Cliffs and United Steelworkers (USW) reached a tentative four-year labor contract – but thousands of USW members are still prepared to strike over stalled negotiations with two of the largest steel manufacturers in the country.

As USW members prepare for what could be the country’s largest strikes in years, the American Federation of Government Employees say they’re standing in solidarity with the workers.

“Our sisters and brothers at USW are fighting for what they’re owed, and they deserve fair treatment from United States Steel and ArcelorMittal. We stand together as one in full-support if they strike over the stalled contract negotiations,” said AFGE National President J. David Cox Sr. “These workers have sacrificed pay increases and benefit improvements to help keep the industry afloat during the recession. And now that profits are surging, these companies are looking to hoard even more money while asking workers to take less.”

In the last collective bargaining agreement with United States Steel and ArcelorMittal, workers agreed to a three-year contract with no wage and benefit increases. But now, with both companies making around $2 billion a year, workers are being offered a six-year CBA with a slight increase in pay – but with no incentive programs or increase in benefits.

“It’s unacceptable that the working people who kept – and still keep – the steel industry running are not being fairly compensated,” said AFGE District 3 National Vice President Phil Glover. “These workers are why the steel industry is as strong as it is, and with more profits from tax cuts, tariffs, and a recovered economy, it’s only right they receive their fair share. Now, to get what they’re owed, these workers are prepared to exercise their right to strike to make it happen. And we’ll be here for them for as long as it takes.”

With thousands of workers prepared to strike after the previous CBA expired at the beginning of September, and with no resolution on the horizon, the country’s largest federal union is standing with USW.

“Steelworkers are one of the pillars of America’s working class,” said AFGE District 8 National Vice President Gregg James. “We fully believe in what they’re doing, and we will do whatever we can to support them. After years of freezes and cuts, it’s beyond time we take care of the men and women who run this industry – and that’s not happening when one of the proposals on the table is higher health care premiums. The workers deserve better, and we know that if they go on strike they’re going to get it.”