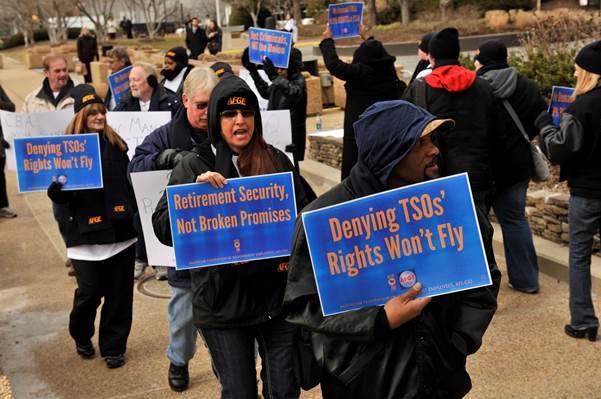 Cox named four main factors driving the long waits: the steep decline in the size of the TSO workforce; diversion of the security fees by Congress to other projects; emphasis on outsourcing duties to non-federal personnel as a temporary “fix” to staffing issues; and treatment of the TSA workforce as second class employees.

“TSOs have always stood on the side of the flying public,” said Cox. “Even though TSOs did not create the conditions resulting in seemingly endless lines at airport checkpoints, they are ones who must deal directly with the shortsightedness of TSA, the airlines, airport authorities, and the Congress.”

In 2014, TSA only hired 373 TSOs to replace the 4,644 who left the agency. The few employees hired were disproportionately part-time employees who have a much higher attrition rate than the full-time workforce. Congress cut the TSA budget for TSO compensation and benefits and continued a misguided cap on the number of full-time employees. The agency also failed to request the funding needed to fully staff checkpoints or even hire up to the statutory cap.

This imbalance between workforce levels and air traffic is the core driver of long lines at airports across the country.

Click here to read a copy of the full testimony.