New Data: White Employees Twice as Likely to be Promoted Than Black Employees at the Veterans Affairs Department 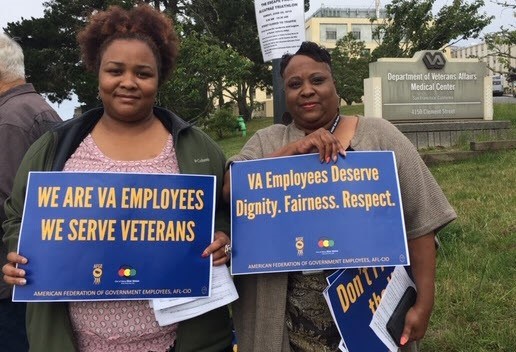 At the Request of Senators Warren and Schatz, GAO to Launch Investigation

The data were obtained through Freedom of Information Act (FOIA) requests and cover hiring practices from 2017 through mid-2020. The topline data are included below, and a full breakdown is available upon request:

In FY 2019, a total of 176,352 individuals applied for management positions, with 6,711 individuals selected for those positions.

“These troubling statistics point to an underlying bias at the VA against Black workers and validate the complaints our members have shared regarding the systemic racism they face every day while simply trying to serve our nation’s veterans and war heroes,” AFGE National President Everett Kelley said.

The hiring data is the newest revelation in a series of issues involving racial discrimination at VA that have been brought to light by the union. In August, AFGE NVAC released the results of a nationwide survey that showed rampant racism at VA going unchecked under Secretary Robert Wilkie, who was appointed by President Donald Trump amid controversy over Wilkie’s longtime membership in the Sons of Confederate Veterans. Notably, the survey found that 78% of respondents reported that systemic racism is a moderate or serious problem at the VA.

In a major victory for VA workers across the nation, the Government Accountability Office decided to investigate systemic racism at VA, in response to the survey. The investigation – which comes at the request of Sens. Brian Schatz and Elizabeth Warren – will look into the culture, policies and practices of the VA and will determine the extent to which systemic racism impacts VA employees, veterans’ benefits, and the quality of care given at VA facilities.

AFGE National VA Council President Alma Lee penned a letter to Secretary Robert Wilkie calling on the VA to take action and requesting that leadership meet with AFGE to collaborate on best practices to combat racism in the workplace.

“We are at a crossroads in American history. COVID-19 has put all federal workers, especially those at the VA at high risk,” AFGE NVAC President Alma Lee said. “VA Secretary Robert Wilkie has failed to protect VA staff not only from COVID-19 but from systemic racism that has plagued the VA. To add to these issues, Secretary Wilkie wants to destroy the NVAC’s Master Collective Bargaining Agreement. Our 265,000 bargaining unit employees have everything to lose if we allow the current president and VA secretary to destroy what we have worked so hard to build. Our rights, our livelihoods, and our very lives are at risk during this pandemic. We must act now to defend our careers at the VA.”

The news regarding systemic racism issues at VA comes as Secretary Wilkie has helped lead a broad campaign by the Trump administration to bring federal employees to heel by undermining their union. Under Wilkie’s leadership, the VA has refused to bargain in good faith over a new collective bargaining agreement.

The union seeks a contract that provides safe working conditions and adequate staffing levels, the space and equipment VA workers need to ensure veterans receive the best care possible, and mechanisms to protect workers from the whims of management. The new contract would be the largest public sector collective bargaining agreement in the United States.

“It’s been a difficult time for us to represent our members and then the pandemic happened,” AFGE Local 781 President Germaine Clarno of Chicago said. “This administration has not stopped attacking federal employees by attempting to destroy our union. We are smarter, stronger, resilient and we cannot stop fighting back. I encourage all local presidents and members to keep fighting, keep filing grievances, keep filing ULPs, keep mobilizing, keep organizing, and keep being a troublemaker.”

AFGE filed a rebuttal on July 5 against the VA for its unlawful and contradictory proposals for the new contract. The VA’s proposals violate federal law and the department’s own stated positions, preventing the two parties from reaching a fair agreement that would benefit VA workers and the veterans they serve.

The rebuttal comes after the union and the VA submitted their respective proposals for the new contract in initial filings on June 3 to the Federal Services Impasse Panel. This most recent exchange of proposals comes after a years-long assault by the Trump administration on the collective bargaining rights of VA workers and a broader push to privatize the VA. In December 2019, negotiations over the new contract were forced into impasse, putting resolution of the dispute in the hands of an impasse panel. The NVAC filed a lawsuit against the panel in March as members of the panel were appointed by the Trump administration and not approved by the Senate, making it unconstitutional. In May, the NVAC sought a federal injunction to prevent the panel from imposing a decision on the contract negotiations.

AFGE is challenging the VA’s decision to remove nine articles from collective bargaining in federal court. The VA has also refused to bargain with AFGE over the implementation of three Trump administration Executive Orders from 2018 – 13836, 13837 and 13839 – that deal directly with performance evaluations, disciplining employees, access to office space and equipment, and the amount of time workers can spend on union activities.