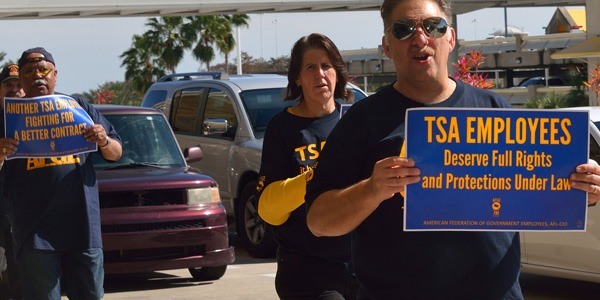 WASHINGTON – American Federation of Government Employees National President Everett Kelley testified today before the House Homeland Security Subcommittee on Transportation and Maritime Security on the need for Congress to pass legislation that would provide Transportation Security Officers with the same Title 5 workplace rights and protections as most other federal employees.

“The TSOs we represent have experienced continual mistreatment, fewer rights and lower pay than their fellow federal employees as a result of the way the Transportation Security Administration was authorized,” Kelley said in his prepared statement. “I am here today to reinforce this message: Granting TSOs the same, full rights under Title 5 of the U.S. Code as other federal employees would directly improve the ability of TSA to provide the flying public the highest level of aviation security.”

The House passed legislation on a bipartisan basis in the previous Congress to put TSOs on the same pay scale as other federal workers and grant them full collective bargaining and due process rights. However, the Senate failed to consider the bill. The legislation was reintroduced in the House on Feb. 5 by Homeland Security Chairman Bennie Thompson and currently has 153 cosponsors from both political parties.

TSA’s unprecedented authority over the workforce policies of the 41,000 TSOs who conduct passenger and baggage screening at nearly 440 airports nationwide has resulted in TSOs having fewer rights and protections than other TSA employees, including the managers who oversee them. TSOs are denied the right to appeal adverse personnel actions to an objective third party or through negotiated grievance procedures, are subjected to a harsher disciplinary system than other federal workers, and are paid less in salary and bonuses than other federal and private-sector employees.

“AFGE is committed to the fight for full civil service rights and protections for the TSO workforce. Low pay, stressful duties, and a sense of unfairness create a trifecta for low morale and hopelessness that impedes the ability of TSOs to boldly serve as the frontline of U.S. aviation security,” Kelley said.