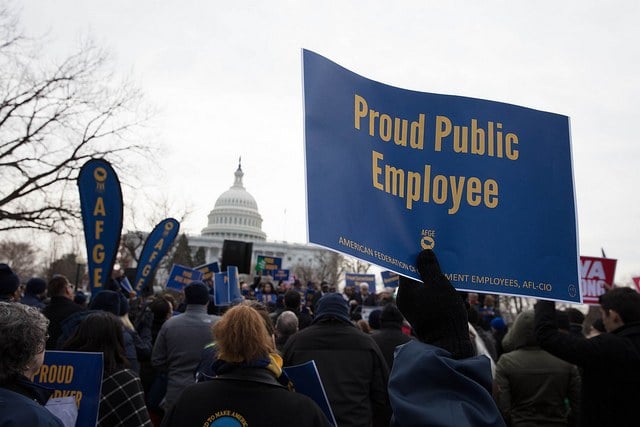 ATLANTA – In what has become an alarming, growing trend, members of President Trump’s administration are attempting to bust unions through bad faith negotiations – with Atlanta-based Centers for Disease Control and Prevention workers becoming the latest targets.

“Our agency’s motto is ‘Saving Lives. Protecting People,’ and that’s just what my colleagues and I do,” said American Federation of Government Employees Local 2883 President Pam Gilbertz. “Our work is vital to our country’s safety and well-being, and instead of allowing us to focus on that, the administration is trying to take away our rights and voice at work.”

After representatives from CDC broke off contract negotiations with AFGE in July, the agency came back to the table last week, this time joined by a representative from CDC’s parent department, Health and Human Services, who offered up a draconian proposal that eliminates nearly 80 percent of the existing agreement.

“This absurd proposal clearly comes from decision makers in Washington and unjustly interferes with our work, our union, and our rights,” said Gilbertz. “We know this isn’t coming from CDC, because they know how important our presence is to the agency’s mission, but we need them to step up on our behalf and allow us to protect public servants’ rights at work.”

The proposals from HHS mirrors those from the Department of Education that were unilaterally imposed last March, and would strip away 37 of 47 articles in the existing contract. It would gut union membership, remove official time, eliminate alternative and telework from the CBA, and dispose of Congressionally mandated due process rights and procedures that have existed for decades. HHS wants to impose their proposal for seven years – four years longer than case law even allows for.

“We understand a negotiation means both sides coming to the table with demands, but what we want is to be met in the middle,” said Gilbertz. “We have never experienced this kind of outward hostility in previous negotiations, and it’s stunning to see it now. The representative that dropped this in our lap wouldn’t even participate in discussing it last week, opting instead to focus on his phone for the entirety of the meeting.”

According to Gilbertz, the proposal would prevent employees from being able to file almost any grievance, deny whistleblower protections, and undermine the union by requiring employees to file arbitrary and unnecessary paperwork to renew their union membership. The union fears these attacks limit their ability to represent workers blowing the whistle or facing harassment, discrimination, and retaliation – which ultimately will hurt their work.

“We are willing to work with HHS and CDC however we can to ensure we’re still able to represent all the workers here, and hope we can do so without them trying to bust our union,” said Gilbertz. “But at the end of the day, we know our rights and we are not afraid to fight,” she added.