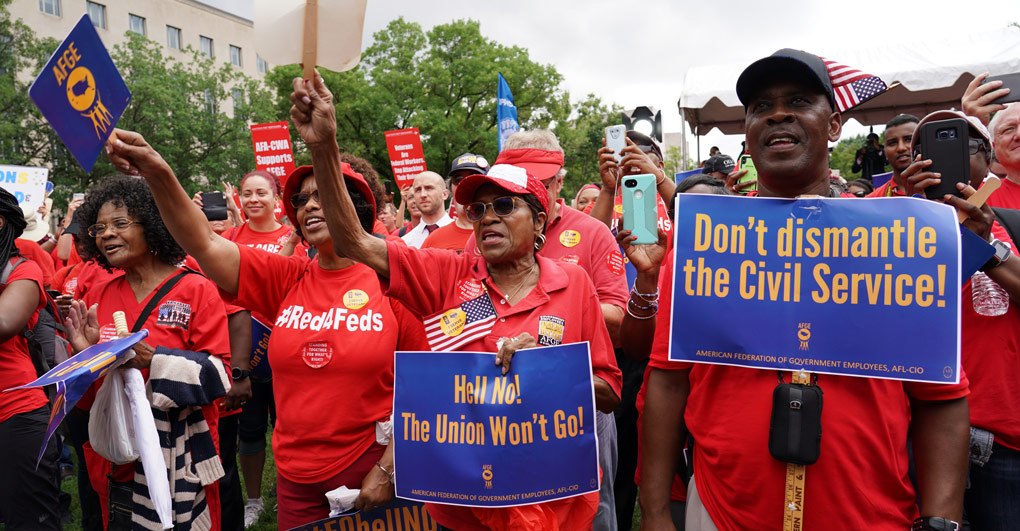 WASHINGTON – The American Federation of Government Employees, the largest union representing federal and D.C. government workers, says an executive order issued yesterday by President Trump will undermine decades of laws and policies designed to protect career civil servants from being hired or fired for political reasons.

The president issued an executive order Wednesday evening that creates a new excepted service hiring authority, Schedule F, that will apply to any career federal employee whose job is in any way connected to federal policy. The order applies to current and new positions and gives agency heads seven months to conduct a complete review of their workforces that will be used to determine which jobs will be converted to the new schedule.

“This is the most profound undermining of the civil service in our lifetimes. The president has doubled down on his effort to politicize and corrupt the professional service. This executive order strips due process rights and protections from perhaps hundreds of thousands of federal employees and will enable political appointees and other officials to hire and fire these workers at will,” AFGE National President Everett Kelley said.

Our apolitical, professional civil service has its foundation in an 1883 law that ended the spoils system, under which federal jobs were handed out based on loyalty to the president – not an individual’s merit or ability to do the job. This system has been expanded and strengthened over the ensuing decades to create a professional civil service that is the envy of most other nations in the world.

“Congress created these rules to guard against arbitrary hiring and firing decisions that are based not on job performance but on political affiliation, personal loyalty tests, and outright discrimination. President Trump’s executive order throws those rules out the window for an enormous portion of the federal workforce,” Kelley said.

“Through this order, President Trump has declared war on the professional civil service by giving himself the authority to fill the government with his political cronies who will pledge their unwavering loyalty to him – not to America,” Kelley added. “By targeting federal workers whose jobs involve government policies, the real-world implications of this order will be disastrous for public health, the environment, the defense of our nation, and virtually every facet of our lives.”