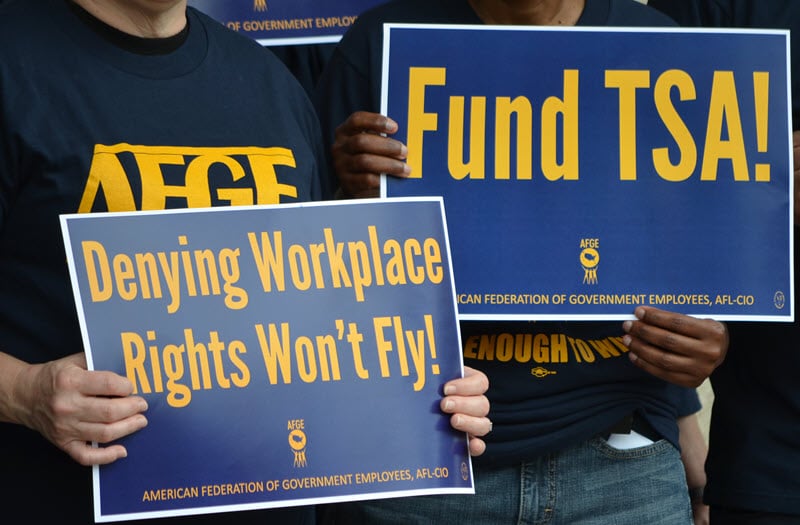 WASHINGTON – As they prepare for the busiest travel season of the year, security officers at our nation’s airports are fearing the loss of pay if the government shuts down for a second time this year, warns the American Federation of Government Employees (AFGE).

TSA officers are among the lowest paid federal employees and have the fewest workplace protections. These officers dedicate their lives and careers to protecting the American public, but many are still repaying loans, having trouble stabilizing their housing conditions, and suffering other repercussions from the 35-day government shutdown earlier this year— the longest in American history. TSA officers say another shutdown would be devastating to an already shattered workforce.

“Employee morale at TSA is consistently low,” said AFGE TSA Council 100 President Hydrick Thomas. “We are approaching the busiest travel season of the year. The last thing our officers need to be worried about is whether or not they’ll have to work for free for another 35 days.”

TSA officers come to work every day to stop guns and other dangerous weapons from getting on our airplanes. Despite this, TSA officers still lack some of the same basic workplace protections other federal employees have, such as fair pay, decent benefits, and worker protections against unfair labor practices. TSA does not follow the General Schedule pay scale and Transportation Security Officers (TSOs) are denied the same overtime pay as other federal workers.

To make matters worse, the agency’s administrator, attorneys, and dictatorial management have stripped TSOs of virtually all of their remaining rights in the collective bargaining process. On July 13, Administrator David Pekoske issued a new “Determination on Transportation Security Officers and Collective Bargaining” which governs TSA officers’ rights on the job and eliminates or severely limits certain contract articles that were once negotiable. AFGE, the exclusive union representative for approximately 46,000 TSA officers nationwide, is currently negotiating its third collective bargaining agreement with TSA.

As a result of these many workplace issues TSOs face, TSA perennially suffers from astronomically high attrition rates, and its employees rank it as one of the worst places to work in the federal government.

Two new bills introduced in both the House and Senate could help change that situation. The Rights for Transportation Security Officers of 2019 (H.R. 1140) and the Strengthening American Transportation Security Act of 2019 (S. 944) introduced by Reps. Bennie Thompson (MS) and Nita Lowey (NY) and Sen. Brian Schatz (HI), respectively, would grant TSA officers the same basic workplace rights as their Department of Homeland Security counterparts.

“We risk our lives every day to protect our country. We’re not asking for special treatment at work— just equal treatment,” said Thomas.

For years, AFGE has been fighting to get a law in place that would protect TSA officers who work hard every day to protect the flying public. AFGE is hopeful these two bills will garner enough support to finally make that happen.