(WASHINGTON)-The second formal labor-management meeting between the Transportation Security Administration and the largest TSA union, the American Federation of Government Employees, took place Oct. 16. The union expects several positive changes as a result of this, and a previous meeting. 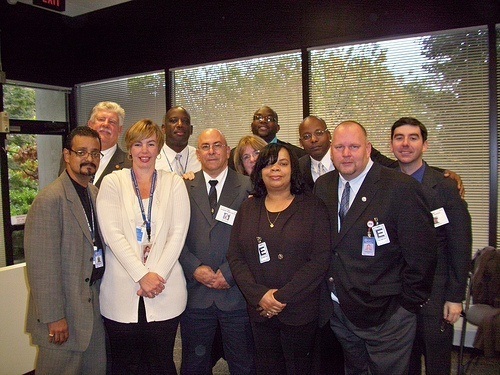 Leave restrictions and disciplinary actions dominated the meeting, in which TSA officials admitted that several airports arbitrarily implement policies not endorsed by the headquarters and in violation of national policies. Changes in local policies are expected as TSA is working to get under control inconsistency between local and national policies.

AFGE National President John Gage led the AFGE team of staff and eight Transportation Security Officers, and proposed several changes to TSA’s personnel practices, including a request to have a sample of acceptable doctor’s note on the back of a sick leave request so that managers can no longer reject leave requests claiming not enough information is provided.

“We stressed that leave use does not constitute leave abuse, which TSA Assistant Administrator for Human Capital Richard Whitford agreed with,” Gage said. “Whitford said that many airports had policies in contradiction with TSA’s national policy. He said the agency is in the process of sending area directors to each airport to gauge local practices and make sure they are consistent with national policies.”

For example, AFGE requested that TSA publish uniform criteria for promotion to various positions and debrief TSOs who apply but are not promoted. TSA officials said they are in the process of making promotions more objective and transparent.

AFGE also briefed TSA about a local policy being implemented at several airports that requires employees to respond to a disciplinary action within 24 hours, without allowing them time to consult with their union representatives. TSA officials at the meeting said this was never approved by TSA. AFGE also raised the issue of untimeliness of disciplinary actions. The union said if employees did something wrong, they should be notified right away and not a year later, in some cases. Earlier notification would also ensure that TSOs are placed on notice that they need to improve their performance or conduct.