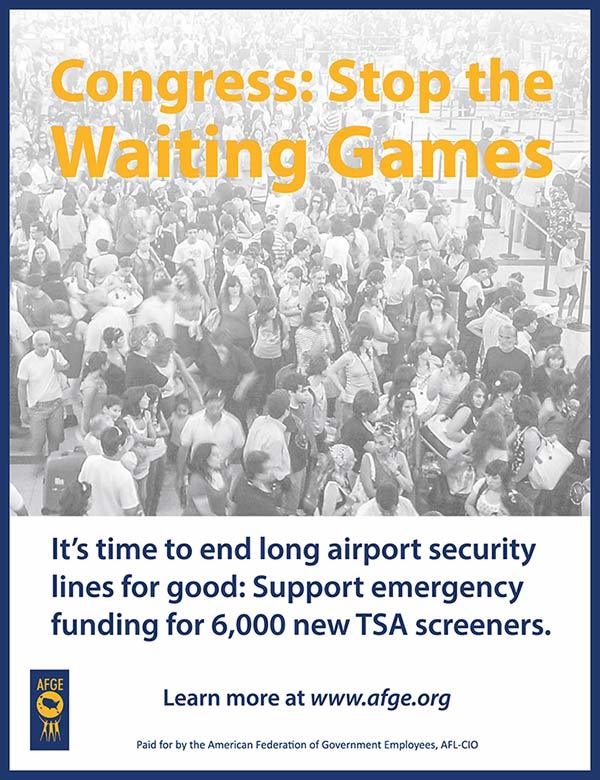 The American Federation of Government Employees took out a full-page ad in The Hill newspaper today urging Congress to pass emergency legislation funding the additional screeners, which are needed to counter years of staffing cuts and address growing passenger volumes.

“It’s time for Congress to stop the waiting games and give TSA the resources it needs to meet growing demands at our nation’s airports,” AFGE National President J. David Cox Sr. said.

TSA currently has about 42,000 officers on the job, down from 47,000 in 2013. At the same time, the volume of passengers has risen 15 percent, from 643 million to 740 million, and is projected to exceed 800 million this year, according to the Bureau of Transportation Statistics.

“This is not a complicated problem, but Congress is avoiding the commonsense solution: Give TSA the resources it needs to hire enough screeners to meet passenger demand,” Cox said.

While Congress has shifted funds from other Homeland Security accounts so TSA can hire about 800 additional officers and pay for additional overtime, these are short-term fixes to a long-term problem that will only grow worse without a significant increase in manpower, Cox said.

“Adding one or two officers to a security line will do little to ease the crush of passengers waiting two or three hours at times to get through the checkpoint, and excessive mandatory overtime will lead to overworked employees,” Cox said. “This is a serious problem that demands a serious solution.”

On May 12, Cox wrote a letter to House and Senate leaders calling for an additional 6,000 screeners.

Despite the lower staffing levels, TSA officers are doing an excellent job of ensuring the safety and security of the flying public. Last year, TSA officers discovered a record 2,653 firearms at security checkpoints across the country, on top of countless other weapons and dangerous items -- a 20 percent increase from 2014.

Yet the understaffing takes its toll in terms of lower employee morale and higher turnover. Every week, 103 screeners quit TSA. In 2014 alone, 373 officers joined the agency, but 4,644 left.

“Security screeners hate the wait as much as passengers and the airlines. It’s bad for morale and makes a difficult job that much harder,” Cox said. “Congress needs to do its job and give TSA the resources it needs to keep the public safe.”