TSA Union Thanks Lawmakers for Their Support on H.R. 1881 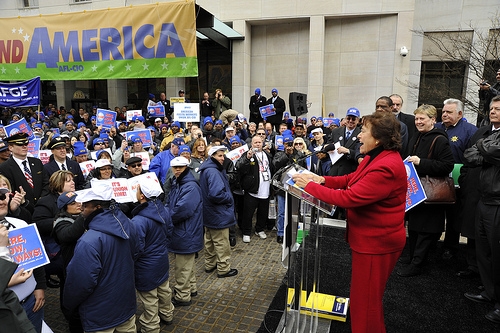 “We’ve been working closely with Representatives Thompson, Lee and Lowey to get H.R.1881 passed. Since 2006, we have fought side-by-side with them for workplace rights and for fair pay for Transportation Security Officers across the country and their cooperation and work with us have been unwavering. They recognize that the nation’s TSOs have gone far too long without a true voice at work,” said John Gage, national president of the American Federation of Government Employees.

Representative Lowey, House Homeland Security Committee Chair Thompson and Transportation Security and Infrastructure Protection Subcommittee Chair Lee introduced the TSA Workforce Enhancement Act, legislation that would repeal the Aviation and Transportation Security Administration (ATSA) footnote that gives TSA the ability to prevent third-party oversight of decisions affecting employees, and goes on to grant TSOs the same collective bargaining rights and workplace protections as other federal workers – including those in DHS.

During AFGE’s recent legislative conference, Rep. Lowey addressed a rally in front of AFL-CIO headquarters where hundreds of supporters had gathered to call for full collective bargaining rights at the agency. Lowey told the cheering crowd that she would continue to work for the passage of the bargaining rights legislation and thanked TSOs for their service to our nation’s flying public.

AFGE, with strong backing from the AFL-CIO, has repeatedly urged Congress to pass H.R. 1881. “This legislation will not only give TSOs the right to bargain collectively,” said Gage. “It will move TSOs under the General Schedule system under which most federal employees are covered.”

AFGE has represented the TSA workforce since the agency was created in 2001. The union currently has approximately 12,000 dues-paying TSA members in 37 Locals nationwide.