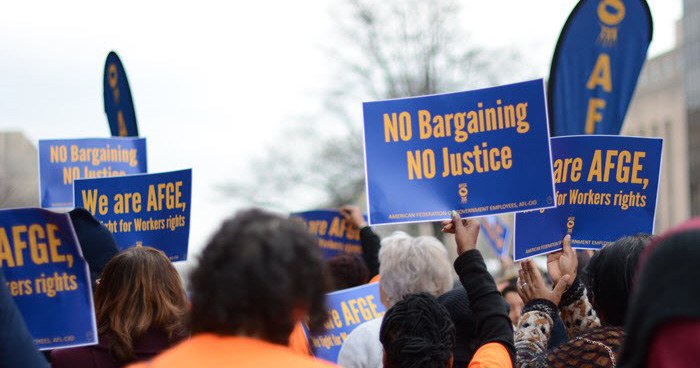 WASHINGTON – The American Federation of Government Employees is echoing a call from 43 U.S. Senators for Congress to take immediate action to prevent the White House from undermining the collective bargaining rights of federal employees.

In a letter sent today to Senate leadership and appropriators, the senators say that the FY 2020 funding bill being finalized for next year must include House-passed language that would prevent President Trump’s political appointees from unilaterally stripping federal employees of their collective bargaining rights and protections against whistleblower retaliation and other mismanagement.

The Senate letter follows a similar letter sent to House Speaker Nancy Pelosi and House appropriations leaders in September from 217 House lawmakers, led by Rep. Jamie Raskin of Maryland. Both the Senate and House letters urge lawmakers to adopt language included in the House-passed Financial Services and General Government Appropriations bill (HR 3351) in the final FY 2020 funding measure. This language would prevent federal agencies from unilaterally imposing anti-worker management edicts in the place of negotiated collective bargaining agreements. The language would also require agencies to abide by current law and bargain in good faith with federal employee unions.

President Trump issued three executive orders last year designed to bust federal labor unions and eliminate workplace protections for federal employees. Agency leaders appointed by the administration are using the executive orders as the basis to repudiate existing contracts and impose anti-worker provisions that have not been negotiated with the union. These illegal changes have allowed agencies including the Environmental Protection Agency and Education Department to evict union representatives from office space, deny employees access to fair representation at the worksite, unilaterally exclude employees from telework, discard agreements used to enforce employment laws and policies at the worksite, and remove employees who have voluntarily joined AFGE from union membership without their consent.

“Now that a federal court has lifted the injunction on the executive orders, it’s open season on federal employee unions and our collective bargaining rights,” AFGE National Secretary-Treasurer Everett Kelley said. “If Congress fails to act, there could be nothing preventing the administration from decimating our contracts and stripping all federal employees of basic rights and protections at the worksite. On behalf of the 700,000 federal and D.C. government workers AFGE proudly represents, I urge Senate and House leaders to protect our democracy by including this language in any appropriations bill that becomes law.”