Kaine has been strong advocate for government workers and programs, AFGE president says 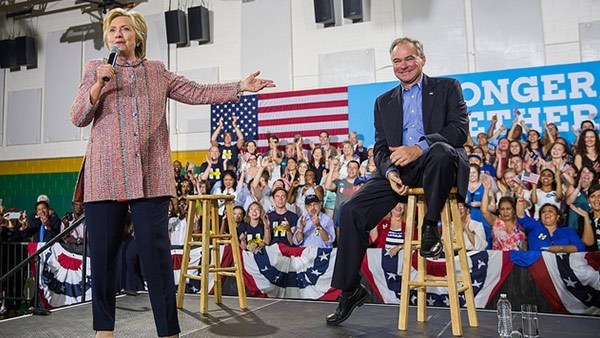 Photo by Michael Davidson for Hillary for America / CC BY

“While representing Virginia in the U.S. Senate, Tim Kaine has been a vocal advocate for government workers and the programs we deliver to the American public. Like Hillary Clinton, Tim Kaine understands the vitally important role of government in ensuring our safety, security, prosperity, and democracy.

“Hillary Clinton is a fighter who will stand up to the anti-worker forces that want to dismantle public social programs, outsource government jobs to the lowest bidder, abolish labor unions, and drive down wages for working families. Federal employees and all public servants will have two strong allies in the White House in a Clinton-Kaine administration.

“Senator Kaine spoke out against the unprecedented 16-day federal government shutdown in 2013, which occurred due to a partisan stalemate over Obamacare funding, and fought to ensure that federal employees would be paid once the government was reopened. In 2015, Kaine went to bat for federal employees in the Department of Homeland Security who were facing unpaid furloughs due to yet another partisan fight in Congress.

“This summer, Sen. Kaine called for increasing TSA’s funding to reverse years of budget cuts that have resulted in longer wait times for airline passengers at security checkpoints. And he has been fighting to prevent the Department of Defense from privatizing military commissaries that are vital source of discounted groceries for our military families and retirees, as well as a source of income for the many veterans and military spouses who work there.

“Tim Kaine believes in supporting and defending a strong public service and we look forward to continuing our positive working relationship with the senator once he becomes vice president.”

AFGE President J. David Cox Sr. will be attending the Democratic National Convention in Philadelphia to cast his vote for presumptive Democratic Presidential nominee Hillary Rodham Clinton as a Maryland delegate. To arrange a media interview with him, contact Cory Bythrow at 202-765-4976 or [email protected].