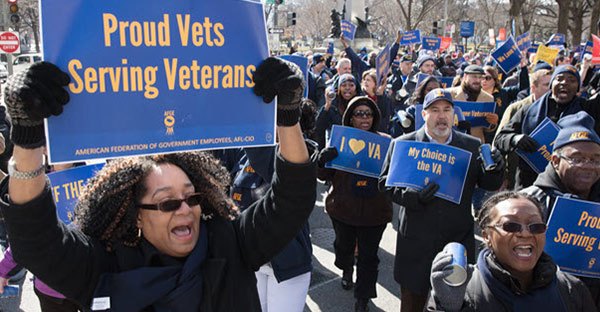 WASHINGTON – Leaders with the American Federation of Government Employees are calling out Veterans Affairs Secretary Robert Wilkie for disparaging a disabled combat veteran who shared his firsthand accounts of veterans who are suffering extreme financial hardships under this unprecedented government shutdown.

In a letter to Secretary Wilkie, AFGE National President J. David Cox Sr. denounced the secretary for attacking the integrity of union member Edward Canales, a 100 percent disabled veteran and federal correctional officer at the Bureau of Prisons.

“There are an estimated 300,000 veterans and their families affected by this shutdown who are experiencing tremendous financial hardship and you apparently couldn’t care less,” Cox wrote. “I can assure you that each one is under unnecessary stress; if they suffer from PTSD, as many do, introducing additional stressors only exacerbates their condition.”

AFGE Local 3584 President Edward Canales, a Gulf War veteran who represents federal correctional workers at a California prison, spoke to ABC News about concerns he’s hearing from veterans who are worried about being able to care for their families during this government shutdown, which is the longest in U.S. history. In response, VA Secretary Wilkie sent a letter to AFGE National President J. David Cox Sr. accusing Canales and other AFGE leaders of exploiting veterans to score political points.

“Since transitioning from the military to the civil service, Ed has continued to advocate for the needs of veterans inside the Bureau of Prisons as a military liaison. When he discusses the concern many veterans have about continuing to provide for their families as this shutdown drags on, he is speaking from firsthand experience,” Young said.

“Instead of Secretary Wilkie diverting attention away from the administration for manufacturing this crisis, he should uphold the dignity of federal employees who are veterans in government – particularly those veterans continuing to serve on the front lines in our nation’s prisons,” Young added. “So, there’s no apology to provide to an administration that has stripped veterans who work in our VA hospitals of due process rights at work. What Edward says is true – we are enduring unnecessary stress in this quagmire that is now the longest ever shutdown in American history.”

President Cox, who served veterans for more than 20 years a registered nurse at the VA, said Secretary Wilkie’s attack on veterans is despicable.

“Secretary Wilkie should be ashamed of himself for tarnishing the honorable name and reputation of Edward Canales and accusing him and other AFGE leaders of treating veterans as victims,” Cox said. “It is a fact that many veterans are among the 800,000 federal employees who are not getting paid during this shutdown – and no amount of shaming Mr. Canales will change that.”