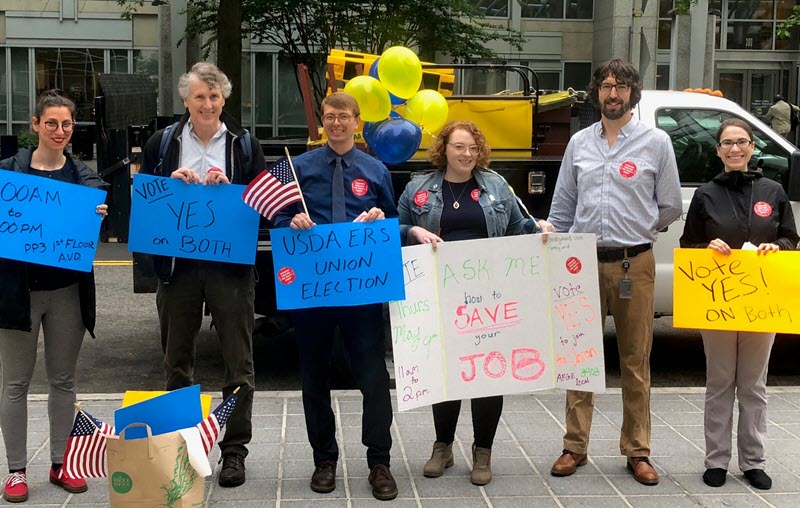 WASHINGTON – On May 9, employees at the U.S. Department of Agriculture’s Economic Research Service (ERS) voted overwhelmingly to join the American Federation of Government Employees (AFGE). The vote was 138 in favor and 4 opposed.

“By joining AFGE, employees at the Economic Research Service are using their collective voice to demand a seat at the table when decisions are made that affect their jobs,” AFGE President J. David Cox Sr. said.

“Under the Trump administration, the USDA is suppressing the publication of scientific research that ERS employees conduct and has proposed upending employees’ lives by relocating the agency outside the nation’s capital,” Cox said. “ERS employees have done the right thing by organizing a strong union so that they will be more effective in defending the important work they do on the public’s behalf.”

The new unit comprises 204 economists, analysts, and other ERS employees who were previously unrepresented. Employees at another USDA agency, the National Institute of Food and Agriculture (NIFA), also will vote soon whether to join AFGE. The NIFA unit would comprise about 235 employees.

By establishing a union at the worksite, ERS is legally required to notify employees in advance of any proposed changes to their working conditions and to bargain with the union in good faith over those proposed changes. In addition, employees in the bargaining unit will gain the legal right to have a union representative present at any meeting in which disciplinary action may result (known as Weingarten rights).