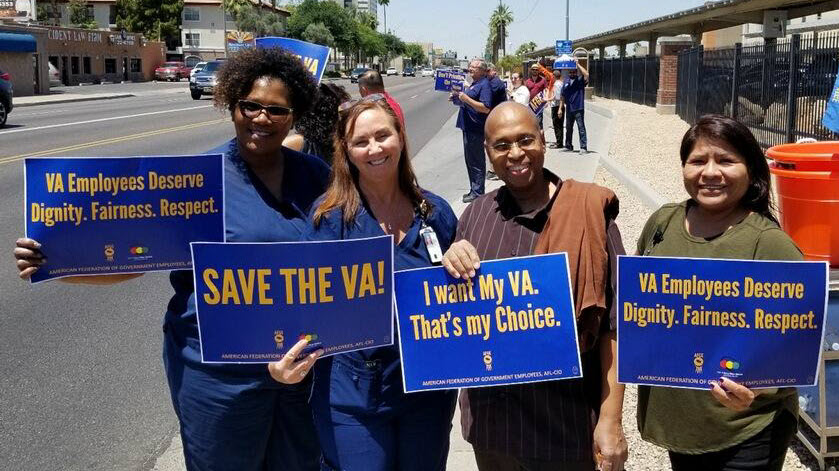 WASHINGTON – The American Federation of Government Employees endorses the call from members of the U.S. Senate, led by Sen. Sherrod Brown of Ohio, for Veterans Affairs Secretary Robert Wilkie to stop the agency’s “anti-worker, anti-union” negotiating tactics and to work with the union on a contract that will help VA employees better serve our nation’s veterans.

“The letter initiated by Senator Brown and co-signed by 33 of his Senate colleagues details the many ways VA officials have attempted to stymie our negotiations, gut the contract covering 260,000 VA employees, and make it impossible for our union to represent all workers as required under the law,” AFGE National President J. David Cox Sr. said.

“Rather than working with us in good faith to bargain a contract that provides employees with the tools and resources they need to serve our veterans, the VA is actively working against those efforts in a clear attempt to force through anti-labor provisions that will make it harder for employees to do their jobs,” Cox said.

In their Aug. 1 letter, the senators warn Secretary Wilkie about the harm his anti-union tactics will have on veterans. Among those signing the letter were six senators currently running for the Democratic Presidential nomination: Cory Booker of New Jersey, Kirsten Gillibrand of New York, Kamala Harris of California, Amy Klobuchar of Minnesota, Bernie Sanders of Vermont, and Elizabeth Warren of Massachusetts.

“The harsh negotiating tactics currently being taken by your agency undermine VA’s mission and threaten the quality of the services it is entrusted to provide to our constituents, our nation’s veterans,” the senators wrote.

In June, 128 members of the U.S. House from both parties wrote a similar letter to Secretary Wilkie.