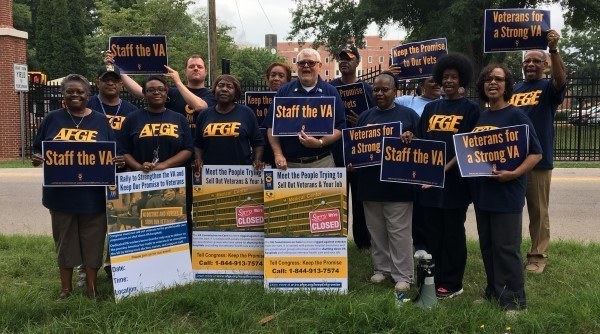 WASHINGTON – Donald Trump’s plan to shut down the VA health care system and hand veterans a voucher to use only for-profit health care is an outrageous betrayal of our nation’s promise to care for the men and women who have borne the battle, the head of the union representing more than 230,000 employees in the Department of Veterans Affairs said today.

“Donald Trump wants to throw veterans to the wolves,” American Federation of Government Employees National President J. David Cox Sr. said. “Private health care for veterans would be an expensive disaster, and no one should be fooled into believing otherwise.

“The VA system provides the best possible health care to veterans at the lowest possible cost. Veterans know this and that’s why they overwhelmingly want to keep the VA health care they have,” Cox said. “Trump’s claims that privatization would improve care and cut costs are dead wrong. He is writing a blank check to huge hospital corporations to profit off the suffering of veterans.”

All independent assessments agree that the VA’s health care is best for veterans on both cost and quality. Veterans themselves overwhelmingly want their health care to come from the federal government, not private hospitals. Every single Veterans Service Organization outside the Koch Brothers-backed sham group is opposed to privatizing the VA.

“Donald Trump needs to learn that VA health care is a serious issue, not something he can embrace one day and dismantle the next. Just last fall he opposed VA privatization, today he supports it on a whim. One has to wonder if he has any idea of the consequences of depriving veterans of the integrated care system on which they rely or any idea of the enormity of the loss to the nation’s health care education system that closing the VA would entail. The irresponsibility of supporting the dismantling of the VA system is staggering,” Cox said.

Cox, who cared for veterans as a VA psychiatric nurse for 20 years, says the VA is working hard to resolve the staffing shortages and wait times that emerged in 2014, hiring 14,000 health care workers and overhauling its patient scheduling system. In the past two years, 97 percent of appointments in the VA were completed within 30 days, with an average wait time of 6.5 days to see a primary care doctor – compared to 19.5 days on average for non-VA patients in the private sector.

“We need to continue investing in the VA, not sell it off for parts,” Cox said. “Veterans who fought to defend our freedoms overseas shouldn’t have to come home and fight with for-profit health care corporations for the care they earned.”

If Trump were serious about caring for veterans, he would invest in the only health care system that is tailored to veterans, that is better than all others, and is working every day to become even stronger, Cox said.

“The VA is not just a health care system, but a community that unites veterans across all wars, ages, and backgrounds. This community heals veterans in ways no private hospital can,” he said. “Health care corporations need to look elsewhere for customers. They should not profit off the wounds of war.”