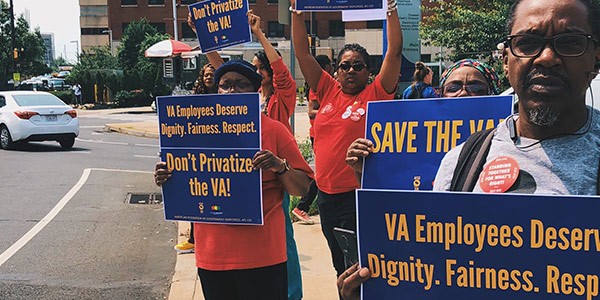 WASHINGTON – The union representing 260,000 employees at the Department of Veterans Affairs is warning that veterans’ health care will suffer as the Trump administration rushes to push millions of veterans outside the VA without any accountability to veterans or taxpayers.

“The VA will be sending veterans out to the private sector without any way of measuring the timeliness and quality of the care they receive,” American Federation of Government Employees National President J. David Cox Sr. said. “This is a clear double standard that is designed to push veterans out of the VA, no matter the consequences, and to starve the VA of the resources it needs to continue providing the high-quality care veterans expect and deserve.”

There is no guarantee that a veteran who is referred to the private sector will be seen any faster than staying with the VA. There is no system in place to track how long it takes veterans to receive care in the private sector or measure the quality of care received – even though the VA’s own clinicians are held to strict timelines and exacting quality standards.

“The health and safety of veterans is at stake, yet Secretary Wilkie thinks it’s more important to meet an artificial deadline rather than do what’s best for their care,” AFGE National VA Council President Alma Lee said. “This is yet another unfortunate example of how the VA under this administration is silencing our voices and doing everything it can to dismantle the VA from the inside out.”

Despite assurances from VA Secretary Robert Wilkie that they are ready to launch today, there is widespread concern from groups representing veterans, employees, and private-sector physicians about this rushed rollout.

“Expanding the number of veterans who can go outside the VA for their care is a major change, and the VA’s attempts to prepare employees and veterans for this drastic adjustment has been woefully inadequate,” Cox said.

“The VA did not seek the input of employee unions or veterans’ organizations and has ignored our collective warnings that rushing this rollout will imperil veterans’ care. The only so-called training VA clinicians have received has come from a series of prepared videos they have been made to watch. The VA is clearly rushing to implement this program despite our very real concerns that veterans will suffer as a result.”

Under a provision of the flawed MISSION Act that takes effect today, the percentage of veterans eligible to receive private-sector care will expand from 8 percent under the previous Choice Program to more than 39 percent under the new Community Care Program. The standards stipulating when veterans must be referred to care outside the VA weren’t even made final until yesterday.

The push to privatize more of the VA comes as the department quietly released data showing a marked increase in the number of vacancies inside the agency. There were 50,201 vacancies as of March 31, up from 49,000 at the end of 2018 and 35,000 at the end of 2017. In addition to doctors and nurses, there are significant shortages of mental health clinicians and VHA police officers – critical positions that the VA needs to fill to help combat a rise in veteran suicides and to protect both patients and employees.

“The vast majority of veterans want to get their care at the VA, where the medical staff is trained to address their unique and specialized needs, and where one-third of employees are veterans themselves,” Lee said. “Yet by allowing vacancies inside the VA to steadily rise, and rushing through reforms that will push more veterans to the private sector, it’s clear that this administration is ignoring the will of veterans in a blind pursuit to privatize the VA.”