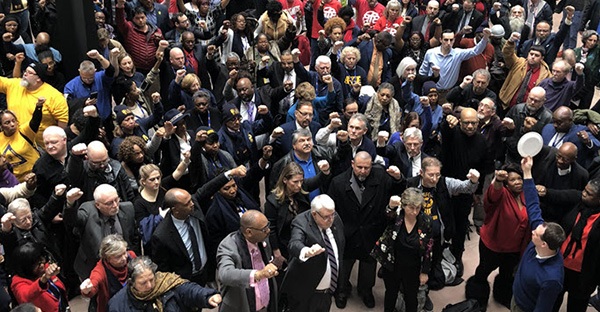 Collective actions of working people could not be ignored

“For nearly two months, 800,000 federal employees and their families were used as pawns in a political battle that upended their lives, stunted local economies, and harmed everyone who depends on the services our federal workers deliver.

“Thanks to the collective actions of union members, labor allies, sympathetic lawmakers, and concerned citizens across the country, workers prevailed and prevented another government shutdown from occurring at midnight tonight.

“The bipartisan legislation that Congress passed yesterday and the president signed into law today provides all federal departments and agencies with approved budgets through the end of the fiscal year. It also provides federal employees with a 1.9 percent average pay adjustment retroactive to the start of the year.

“Thank you to House Speaker Nancy Pelosi and Senate Minority Leader Chuck Schumer for leading us through this ordeal and for being staunch advocates for federal employees everywhere. Thank you to every member of the bipartisan conference committee who helped craft the budget language, and to every member of Congress who voted to keep our government open. I want to especially thank Sen. Chris Van Hollen of Maryland and Sen. James Lankford of Oklahoma for fighting to get federal workers a well-deserved pay raise.

“Federal workers will receive all the pay and leave they earned during the 35 days the government was shut down thanks to legislation passed by Congress and signed into law by the president last month. Thank you to Sen. Ben Cardin of Maryland for introducing this legislation, which also ensures that federal workers will be paid in the result of any future government shutdown.”