Guest article from the AFL-CIO

Bureau of Labor Statistics data released Jan. 19 showed union membership in the United States grew by more than 273,000 in 2022, despite fierce and often illegal corporate union-busting.

While the data also showed a slight dip in nationwide union density, the real story is that hundreds of thousands of workers overcame the odds to join a union last year in a system rigged against them. Corporate giants such as Amazon and Starbucks are spending millions of dollars to thwart collective action in the workplace, harassing, intimidating and even illegally firing workers trying to form unions to improve their lives. Still, many workers found a way to have a voice on the job.

Despite broken labor laws and rampant union-busting, working people are undeterred in their pursuit of a union. The year 2022 saw a reinvigorated labor movement, one led by young workers and workers of color, who organized at a clip not seen in years.

Last year there was a 53% rise in union elections, including groundbreaking wins at corporations that were once viewed as impossible to organize.

Unions are more popular with the public now than at any point in the past five decades because working people are fed up with low pay, unsafe working conditions and shoddy treatment on the job. This momentum won't wane; in fact, workers are doubling down on standing together. 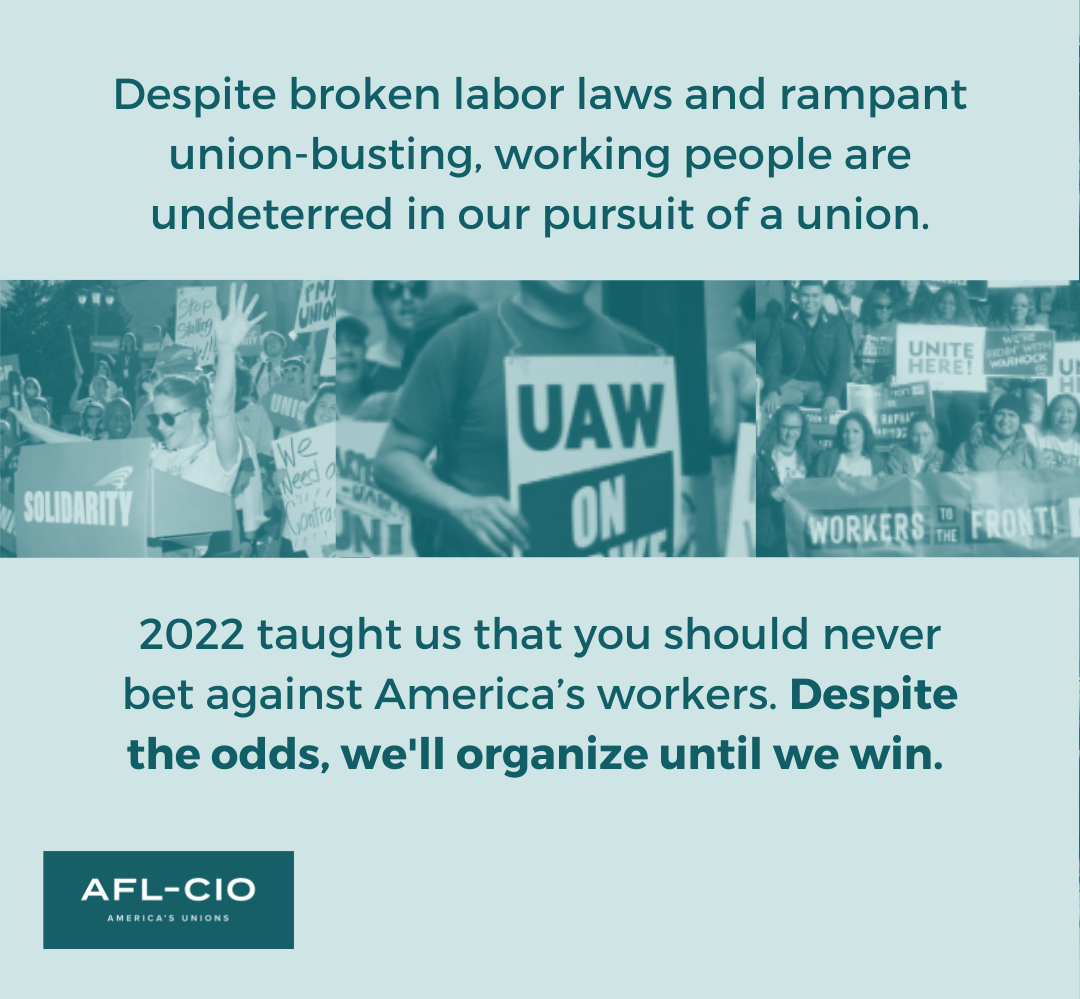 “In 2022, we saw working people rising up despite often illegal opposition from companies that would rather pay union-busting firms millions than give workers a seat at the table,” said AFL-CIO President Liz Shuler. “The momentum of the moment we are in is clear. Organizing victories are happening in every industry, public and private, and every sector of our economy all across the country. The wave of organizing will continue to gather steam in 2023 and beyond despite broken labor laws that rig the system against workers.”

This year, the labor movement is going all in on an organizing agenda that will ensure every worker who wants a union has the chance to join or form one. Now’s the time for elected leaders to fix what’s broken by reforming our outdated labor laws that for far too long have stacked the deck against working people.

Rhetoric in support of working people isn’t enough. We need leaders who will fight to pass laws like the PRO Act and Public Sector Freedom to Negotiate Act that level the playing field and give workers a real chance to better our lives, strengthen our communities and create a more equitable economy.

If last year taught us anything, it’s that you should never bet against the American worker. Despite the odds, we’ll organize until we win.