On June 16, three balloons that bore the name of Akyra Murray, a Philadelphia resident, drifted slowly towards the heavens above her city's streets. Akyra, the youngest of the 49 victims of the recent Orlando shooting, was a local high school graduate whose athletic gifts earned her a full basketball scholarship to Mercyhurst University in Erie.

She had gone to the Pulse nightclub the week before to celebrate her graduation, not knowing her life would be cut short by an act of hate and terror.

The rainbow-colored balloons were released from the hands of AFGE Local 940 members who gathered in front of a VA facility to remember Akyra and honor the other victims. Members said they wanted to show Akyra that she is loved by her community. They also comforted each other and shared a message of love and inclusion. 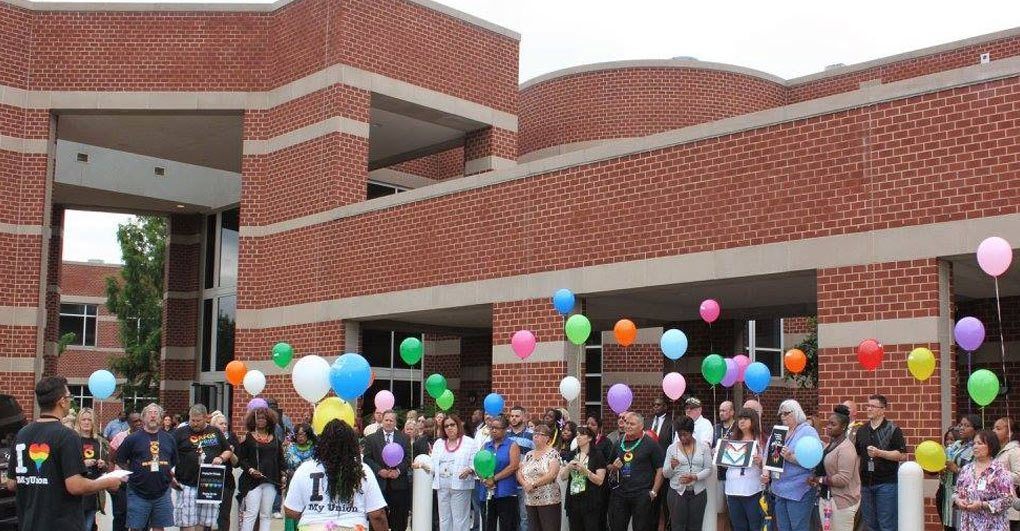 “These people were not just LGBTQ and allies, they were somebody’s family,” said Larry Morris, chair of the local’s Pride Committee. “These people lost their lives because of hate, and until we all stand together in the workplace and society as a whole, people will continue to experience pain because of who they are.”

The remembrance ceremony took place after the Philadelphia VA Regional Office and Insurance Center’s annual Diversity Day celebration. It was organized by the local’s Pride Committee, which was created two years ago when members voted to show support for LGBTQ members.

Akyra's name, along with the names of other victims, were placed on their own individual balloons. The Local then released the individual's balloon after his or her name was said.

“Pride began in Philadelphia, and I am happy to see the tradition of inclusion continued at this local,” added Jim Rihel, a local member and 3rd District national YOUNG coordinator.

Local President Joe Malizia said after 38 years in government service and over 26 years as an officer of the local, this event was one that made him especially proud of his members and their dedication to not only their local community but communities where they see a need.

“Our connection to our surrounding community is a staple of unionism and the labor movement,” he said.

"The struggle for LGBTQ people, women, people of color and all other marginalized groups to be free in this world is also our struggle. When they are gunned down, harassed, or discriminated against we take it personally."  said AFGE National Vice President for Women and Fair Practices Augusta Thomas in a statement. "We stand in solidarity with the LGBTQ community as we believe everyone must have the freedom to live in this world openly, authentically and unapologetically."

"Our hearts cry out for the 49 innocent lives that were lost and the dozens of people who were injured," he said. "For any good to come of this tragedy, we must become more united in our struggle to ensure that every person is treated with love, respect, tolerance, and dignity."

Indeed, AFGE members across the country have always been active in their local communities where they live and work. Earlier this year, they raised money and distributed bottles of clean water to Flint residents. They provided neckties and bowties for boys who were graduating from local high schools in Alabama and taught them how to tie the neckties to stress the importance of dressing professionally for not only job interviews but all life endeavors. They distributed food to those in need. They raise funds and provide support for those fighting ovarian cancer.

Visit www.afge.org for more information on how AFGE members are serving their communities.