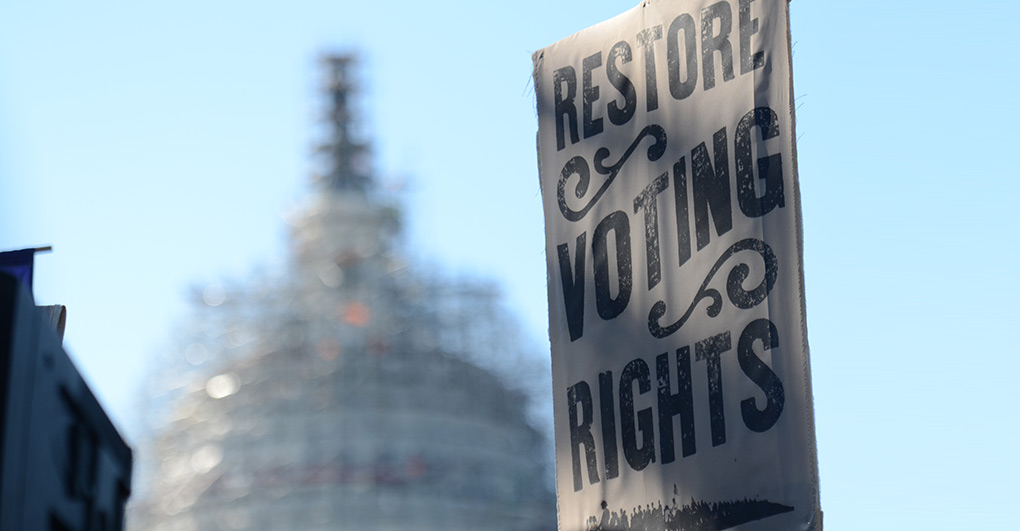 Everybody should have the right to vote. But 50 years after the Voting Rights Act became law giving African-Americans equal rights at the polls, systematic voter suppression in the form of new voting laws has resulted in millions not being able to cast their ballots.

That’s why hundreds of civil rights activists marched 1,002 miles from Selma, Alabama – the birth place of the Voting Rights Act – to Washington, D.C. to petition Congress to restore voting rights. Their Journey for Justice began on Aug. 1 and concluded Sept. 16 at the halls of Congress – the crime scene, as some civil rights leaders put it.

AFGE joined the marchers at Upper Senate Park on Sept. 16 to show our support as voting rights, civil rights, and labor rights are inextricably intertwined.

“If you want people to vote, protect the right to vote,” Cornell William Brooks, president and CEO of the National Association for the Advancement of Colored People (NAACP) told the crowd. “You cannot seek people’s votes without protecting the right to vote.”

Sen. Patrick Leahy of Vermont said members of Congress who support voter restrictions don’t deserve to take the oath of office. He has introduced the Voting Rights Advancement Act of 2015 to restore and advance the Voting Rights Act that has been weakened by a Supreme Court decision two years ago. The ruling struck down a piece of the Voting Rights Act that required states with a history of racial discrimination to clear with the Justice Department before making any changes to voting laws. That decision paved the way for states to pass voting suppression laws such as the ones rolling back early voting and voter ID laws that disproportionately suppress the voting rights of minorities.

Rev. William Barber, the creator of Moral Mondays civil-rights protests in North Carolina, energized the crowd when he took to the podium. Washington, D.C. is a funny place, he said. In order to get Congress and administrations to do something, people have to make them do it.

“What’s happening today is a crime against democracy,” he said. “How is it that after 50 years we have less voting rights? That’s a crime that’s happening in the halls of Congress.”

Rep. Terri Sewell of Alabama called on young people to carry the torch of justice and demand that Congress restore the right to vote.

“This is America’s Journey for Justice,” noted Sen. Ben Cardin of Maryland.

Sen. Mark Warner of Virginia said the U.S. is the only major country in the world that’s trying to restrict the right to vote.

Rep. Sheila Jackson Lee of Texas and Sen. Dick Durbin of Illinois urged activists to also fight for criminal justice as it affects many young people whose lives were destroyed after being put in prison under obscure circumstances.

“We need a movement. We need millions of people to restore voting rights,” Gebre said.