Family and Service at the VA

AFGE VA Local 2328 member Linda Fitzgerald tells the touching story of her daughter and her service at the Department of Veterans Affairs. 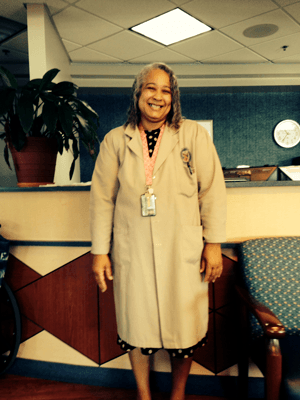 “In June 2002, my daughter, Ebony Hope Church, was 29 years old and active duty became seriously ill, and near death due to some medical complications.  She was sent to a German civilian hospital to be treated.  At that time I was a training technician at the Norfolk Naval Base in Norfolk, Virginia with 19 years of service.

“The Army quickly sent for me to get my grandchildren and care for my daughter.  Eventually she was medically discharged while still an inpatient at that German hospital.  After 6 weeks she was medevac’d to Walter Reed and eventually to Portsmouth Naval Medical Center.  There were many surgeries, complications and near death experiences.  She finally died as a result of this disorder on December 15, 2003.

“My grandchildren and my entire family were heartbroken.  We miss her every day.  I lost my job and my family, and I raised her boys.

“During her illness there were some wonderful social workers who helped us through our journey, but there was one really bad one.  I told my daughter that I could do a better job and she said, “why don’t you mommy?”  After she died, I changed careers and became a social worker.  I tried several years to get a job with the VA, so that I could give back and be that good social worker that helped those in need.  I finally got the opportunity a few years ago and I love assisting our veterans in getting the best care that the VA can provide.

“The news media forgets that the VA is made up of people and there are good, outstanding VA employees who give their best every day. But the few employees that shed a negative light on the VA get more attention than those dedicated ones who give their all every day because they care.”

To share your experience as a VA employee or patient, send us your story at[email protected].