It’s the first Tuesday of the month and Marlena Slaughter’s stomach starts to rumble. She’s excited (and hungry) as she heads to a Golden Corral in Columbus, Ohio, for a gathering of 25 AFGE retirees. At the once-a-month meeting, the group enjoys plentiful food and good conversation about issues that matter to them and other public servants.

Some are excited about the monthly speaker; some are concerned about their finances; others are passionate about ensuring that attacks against unions end in their lifetime. Many have been long-time friends, and worked side-by-side at various agencies at the Defense Logistics Supply Center Columbus until they retired. And they are always delighted to get together.

“It makes my heart soar when I think about how appreciated our retirees are in this role,” Slaughter says. “I want what we do to make a mark—I want it to encourage other retirees to give back and look out for one another. We cannot drop the ball on issues about our livelihood."

"We have to stay strong, so we are constantly on the move,” she explains.

For Slaughter, being on the move is nothing new. She raised twin boys, another son, and two of her grandchildren. She took both of her ailing parents into her home until they passed away. And, she is still devoted to spending time with her two great-grandchildren and at her church.

After retiring from her own career in public service at DLA, Slaughter remained committed to serving others. She has continued in her role as Local 1148's executive vice president and was recently elected to another term. And she's more than just a member of her local retiree group — she leads it. Slaughter is just one of many shining examples of how the fight for workplace justice has no retirement date. 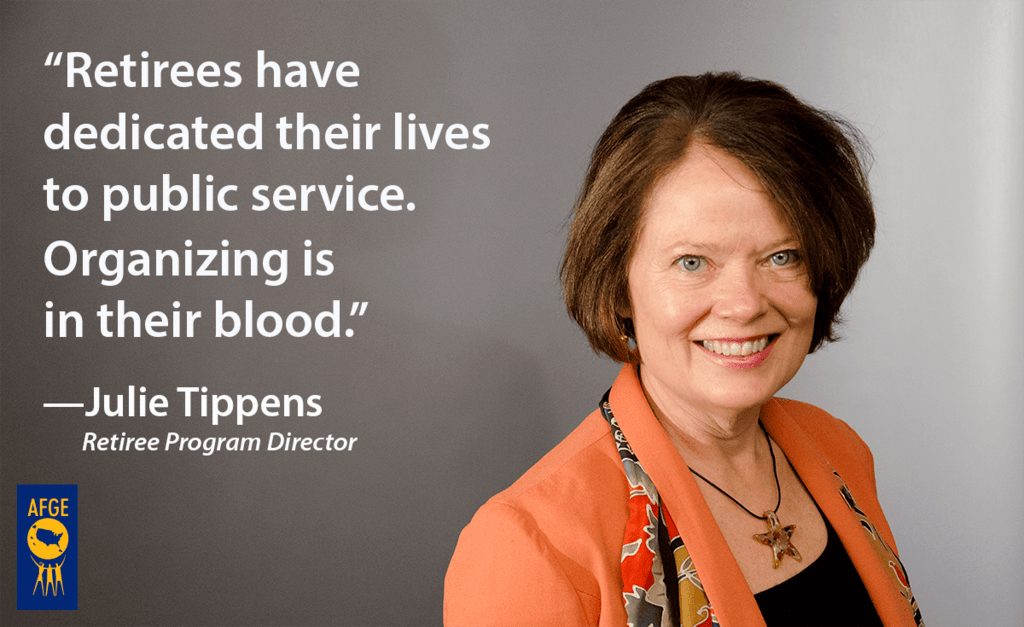 Julie Tippens, AFGE's new retiree director, is also inspired by the activities of AFGE's retirees and excited to help expand the program across the country. In her first months on the job, Tippens has interviewed many retirees about programs at their locals, listened to their needs, and helped build connections between them.

“For many retirees, staying active with AFGE makes sense: continued access to AFGE's Member Benefits program helps them save money and AFGE provides a platform for them to continue organizing and look out for one another," Tippens explains. “These are people who have dedicated their lives to public service and organizing is in their blood. They have spent much of their lives lifting up the voices of working people and have been on the front lines of the labor and civil rights movements for decades."

After consultation with Locals who have existing retiree programs, Tippens designed a two-pronged strategy for building a national retiree program from the ground up. First, she’s planning to build on the success of Locals that already have robust programs in place, encouraging Locals to designate retiree coordinators and recruit active members as they near retirement.

For instance, Local 1148's retiree group isn’t just about buffets. They have more than 350 active retirees who host speakers, discuss government programs and news, help at food banks, and take over administrative duties while other Local members are in the field or at trainings. They speak with lawmakers about the issues that impact government workers at their home in Columbus, Ohio and in Washington, D.C. They also pound the pavement to educate and mobilize members of their community.

"I don't know where we'd be without our retiree members," Local 1148 President Robin Menafee explains. "They're consistent, dedicated, and inspiring."

The second part of Tippens' strategy is to listen to retirees. With about 16,000 active AFGE retiree members – reconnecting them with their Locals and other retirees when possible — she’s looking to build a scalable mobilization program.

Tippens continues to ask questions as the program begins to move forward — through personal calls, face-to-face conversations, emails, and a national survey.

"I want to hear from them directly about how the AFGE Retiree Program can best serve their needs and interests," she notes. "The input of our members is priceless — I'm learning something new about our union brothers and sisters every day."

Want to Get Involved?

Sign up for AFGE Retiree Emails to receive regular emails that offer gifts, discounts, and a chance to provide feedback to make sure all AFGE members have what they need to retire with dignity.