Going to the Mat: Olympian and AFGE Member Goes for the Gold

When she was in elementary school, Grace Jividen remembers sitting on the sidelines of her brother's judo match and crying - not because she was bored. But because she wanted a chance to play too.

"When I was in Europe, they had girls' competitions, but not in Ohio," Jividen said. "I used to watch my brother and I used to cry."

Jividen wasn't on the sidelines for long, though. After watching her brothers compete, a trainer finally gave her a shot to start training. 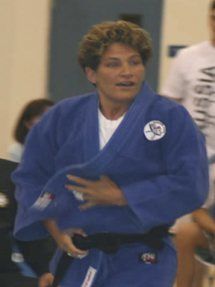 "I had two older siblings, and they were in judo, and basically in order for them to dojudo they had to babysit me. I sat there and watched them play and said, this looks fun. So one of the instructors let me participate in the sport too."

Jividen would go on to win dozens of medals, compete in the Olympics, open her own judo studio, and win her latest award: the silver medal at the 2015 World Police & Fire Games for judo in Fairfax, Virginia. Jividen, a proud member of AFGE Local 709 in Littleton, CO for 24 years, said that her coworkers were a huge support system for her, helping pay her way to the competition this year and giving her the time to prepare for the competition.

"I would never been able to compete without the union's support," she said. "They were flexible enough to let me get this tournament ready. I started in January, and I knew the competition was in June, so I had 6 months to prepare. It was nice to have the time to train."

This is the third World Police & Fire Games that Jividen has been able to compete in. She won the bronze in 2011, when the event was held in New York City. She first heard about the competition from a coworker of hers in the Bureau of Prisons.

"One of my coworkers wanted to go for a run or something, and he told me about it," she said. "He told me 'I found one for judo and thought of you, you would be good at it and you would win it.'"

The World Police and Fire Games are an international competition held every year since 1985. To compete, you must be an active law enforcement worker, and must be nationally ranked to qualify (which Grace is). The event comprises dozens of sports and activities, including traditional Olympic sports and law enforcement-specific events like Police Dog competitions and Ultimate Firefighter trials. 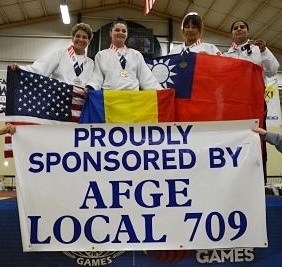 "Those guys are athletes, and I think this event is more important than anything in the games," she said. "You have all these people from all over the world doing the same thing to protect and serve their communities. They put their lives on the line. In order to do that, you have to stay in shape. They strive to be the best at what they do, and I think they're heroes."

Jividen said that the games were even more exciting to her than her stint on the USA Olympics team. She represented the United States in women's judo in the 1992 Barcelona Games - not far from where she was first introduced to judo growing up in Madrid, Spain. She was especially excited to share her union pride with other competitors.

"When I pulled that banner out and it said Local 709 union on it, I was amazed at how many athletes from other countries came up to me and said that they had unions too."

"When I pulled that banner out and it said Local 709 union on it, I was amazed at how many athletes from other countries came up to me and said that they had unions too," Jividen said. "They were ecstatic. I thought it was just the USA way. They may not call their organizations a union, but they were very supportive."

When she's not working at FCI Englewood, she's spending time with her husband and daughter, and training others at her judo club in Littleton. Grace said it was important to her to introduce young people in her community to judo, not only so that they enjoy the sport, but so that they learn the same determination that the sport has taught her.

"You cannot take any shortcuts," she said. "It takes a little more to become a champion. You have to push that extra mile. You cannot quit. Once you start something, you have to finish it. That's why I always tell my students, that's how you become a champion in life. Whether it's judo or becoming a doctor, whatever. You can't let anybody stop you from becoming what you want to be."