Inside the Plot to Destroy Veterans' Health Care

Veterans earned their VA health care when they signed the dotted line to serve our country. So when American Legion Commander Dale Barnett saw that a commission that is top-heavy with private hospital executives was trying to dismantle it, he had to be blunt.

“I don’t understand how commissions paid by the federal government are able to break ranks, create an unapproved report and try to advance self-serving agendas while operating as congressional appointees,” Barnett said.

He's talking about the congressionally-mandated Commission on Care, an entity dominated by private hospital executives and Koch Brothers-affiliated "policy experts." The commission's charge under the 2014 Choice Act is to develop a 20-year strategy to ensure that veterans receive high quality, timely care.

Instead of finding ways to strengthen the VA, the majority of commissioners have joined with a group of lawmakers and the Koch Brothers-backed Concerned Veterans for America to recommend a strategy that takes over for themselves to the president and Congress.

If the public doesn't start paying attention, they might succeed.

And as the leader of a veterans' organization with more than 2 million members, he knows a little bit about what matters to veterans. But not a single veterans service organization is represented on the Commission – not the American Legion, not the Disabled American Veterans, Veterans of Foreign Wars, or Paralyzed Veterans of America.

The 15-member commission is expected to release its “strategy report” in June, which is widely anticipated to include radical dismantling of the VA's integrated health care delivery system and major steps toward privatizing the VA health care our veterans earned.

“The American Legion does not want privatization of VA health care except in emergency situations and then only temporarily, until a long-term solution is achieved," he said. "Veterans believe VA’s problems can be fixed and trust can be restored. The quality of VA health care continues to outperform the private sector in study after study. Veterans do not want a reduction of quality. They just want reasonable access to care.”

“The American Legion does not want privatization of VA health care except in emergency situations and then only temporarily, until a long-term solution is achieved. Veterans believe VA’s problems can be fixed and trust can be restored."

The Commission Is Stacked with Private Hospital Executives

The VA Commission on Care was established as part of the Veterans Access, Choice, and Accountability Act to develop recommendations for improving veterans’ healthcare. It is comprised of 15 appointees, four of whom are high-level private hospital executives that stand to profit from privatization. One is employed by the Koch Brothers’ fake veterans group, Concerned Veterans for America (CVA).

Seating a Koch-affiliated political group like CVA on the Commission is a classic example of politicians selling out their constituents to big-money corporate interests. Real veterans’ groups like the American Legion have publicly criticized the Commission’s pro-privatization bias and want a seat at the table for veterans.

If these private hospital executives succeed in privatizing VA health care, it means a huge windfall for them as they stand to profit from nearly nine million veterans enrolled in the VA, 89.7 million outpatient visits each year, and 236,000 health care appointments per day.

The VA Is Not Like Other Health Care Systems

“For all of the criticism that the VA health care system receives, it continues to outperform, both in quality of care and patient satisfaction, every other health-care system in America,” states the Independent Budget Veterans Service Organizations, a group comprised of the Veterans of Foreign Wars, the Disabled American Veterans, the Paralyzed Veterans of America, and AMVETs. 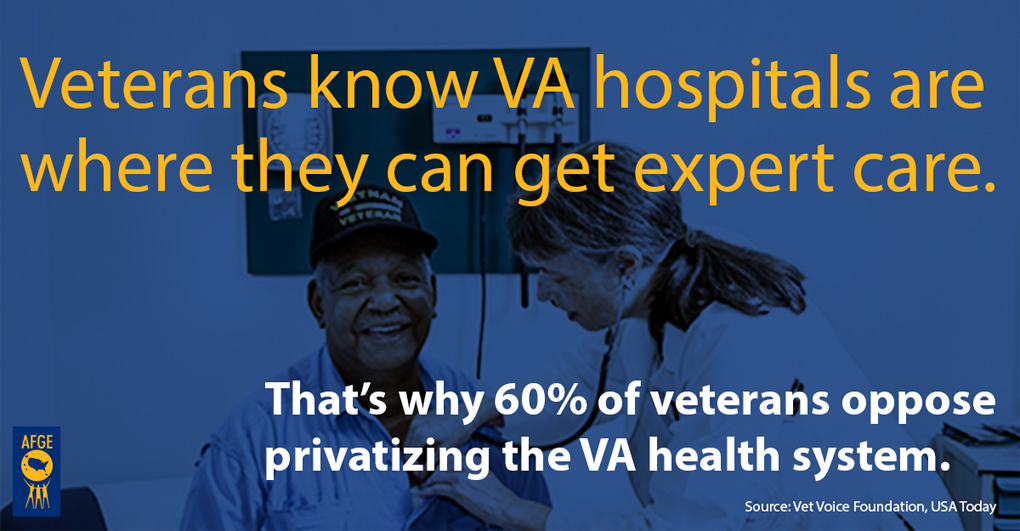 Indeed, the VA is a model health care system as it has led the way in medical research, specialized services, and health care technologies. Unlike the rest of the population, veterans need more complex care, and the VA has specific centers for traumatic brain injury, prosthetic services, spinal cord injury/dysfunctional, blind rehabilitation, mental health, and war-related poly-traumatic injuries.

Despite what the privatizers have been pushing, most veterans are very pleased with the care they receive from the VA.

“Such quality and expertise on veterans’ health care cannot be adequately duplicated in the private sector,” said the veterans organizations. “The Institute of Medicine has cited the [Veterans Health Administration] as the nation’s leader in tracking and minimizing medical errors.”

The most important issue to address is staffing. Years of budget shortfalls have prevented the department from building new facilities, properly maintaining existing facilities, hiring enough people, and keeping up with the huge influx of veterans returning from overseas. The VA must start by filling the more than 40,000 health care vacancies open in the system.

Sadly, years of hateful rhetoric against the government and pay and benefit cuts imposed on public servants have made hiring even more challenging. Veterans Affairs employees have a big enough job to do without acting as Congress' personal punching bag.

Veterans took an oath to defend our country. It's time we recommit to defending them. Veterans deserve access to quality care that treats the whole patient - VA health care designed for just for them. We can't allow big money to break that promise. 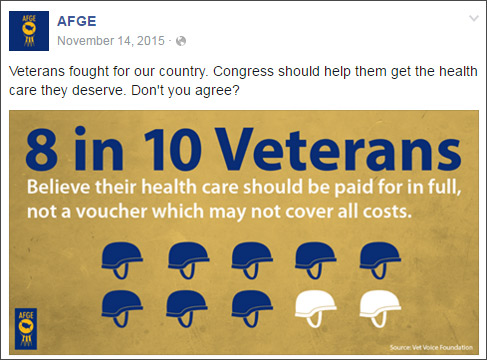