Looking Back, Forging Ahead

For more than eight decades, AFGE's history has been crafted by hard-working people who have fought to empower government employees, improve working conditions and ensure that all Americans get the government services they deserve. During Labor History Month, AFGE will revisit some of its triumphs, examine the culture of the labor movement, and look to a future where we are Big Enough to Win.

AFGE's original members found themselves in a position much like government employees are in today. In 1932, 42 unionists, representing 562 of their coworkers, worked to create AFGE in the midst of one of the hardest economic times our country has ever faced. Government workers saw their wages slashed and their retirement at risk. The very young Union stood up to fight for a living wage and to be treated with dignity. Time has shown that these are not new attacks on government employees. The only difference is that now, at 292,666 members, our voices are louder and stronger than ever!

In 1940, while segregation and low-wage jobs for African Americans were the norm across the country, AFGE Local 383 was founded by African Americans at the Industrial Home School in D.C. Government. AFGE continues its work in the District and surrounding area, ensuring the D.C.  workers enjoy union wages and benefits and the right to speak up collectively. 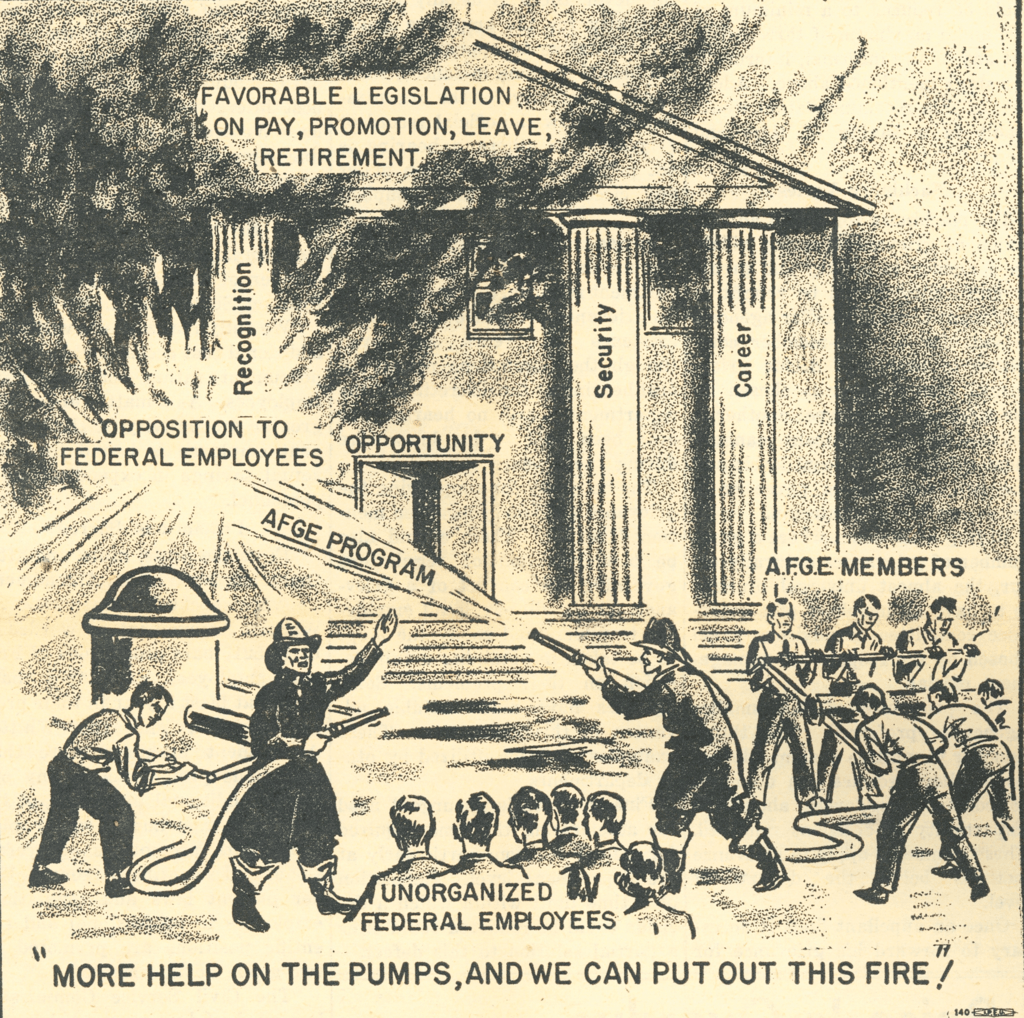 A cartoon from the front page of the Sept. 7, 1951 edition of The Government Standard.

AFGE members voted in 1968 to create the union's Fair Practices Department -- expanded in 1970 to be the Women's and Fair Practices Department -- at a time when America faced the most vexing challenges of its time regarding race. AFGE took a leading role in creating a union response to unjust policies in the federal sector. WFP continues to build on the legacy through the Human Rights Committee and the AFGE PRIDE program. WFP even worked with the Transgender Law Center to create Guidance for Locals on a Transgender Inclusive Workplace.

A staple of our current union activities -- the Lunch and Learn -- was expanded by AFGE National President Ken Blaylock in 1986. It originally started as a membership building program in AFGE Local 1923. It continues to be an activity where employees can gather during their lunch hour and learn more about issues that impact the government workforce and about their AFGE family.

At the time, AFGE had to confront a Congress that was slashing federal jobs in the name of a balanced budget, while contractors soaked up privatized defense work. Due to insufficient organizing, AFGE AFGE was also losing 1,000 union members a month. Through strategic planning, engagement, and organizing, AFGE started to gain ground.

AFGE's efforts to grow the union kicked into high-gear in 1997, when President John Sturdivant organized the '97 Vision' Conference. It helped spur intense organizing action, with the goal of reaching 200,000 members by 2002. Today, we stand at just short of 300,000 members, a testament to the bold decision-making and decisive action of those that came before us.

History is clear, brothers and sisters. AFGE has seen the same repeated attacks by outside forces over and over -- and yet, every time we have prevailed through collective action, organizing and by standing together in solidarity.

Becoming Big Enough to Win is not just a dream. AFGE members around the country are writing the next chapter of AFGE's history every day. To win the future of our choice, we must grow our membership, build our political power, strengthen every local and train and engage our members. Keep an eye out for the next three Labor History Month articles and help craft AFGE's future by visiting www.afge.org/WIN.