When Matthew McDearmon sat down at his new employee orientation at the Bureau of Prisons, he wasn't expecting to become an official in his local union – much less the 300,000th member of AFGE.

McDearmon, an Air Force veteran and correctional officer at Administrative U.S. Penitentiary Thomson, knows the power of teamwork and the value of speaking up together. To him, joining in union with his colleagues was just the beginning of making a better workplace for current employees and creating a brighter future for the next generation of public servants.

“I think it’s good to be a part of something that’s bigger than yourself,” he said. “You can learn the issues that are going on within the institution and the area. Hopefully you can help solve any disconnects between yourself and the management.”

At the orientation, McDearmon heard his coworkers' plan to make the worksite more safe, and he liked their ideas. Then, he got involved.

When working people stand together as a team, we can accomplish great things. But creating a better workplace for everyone requires participation by everyone – a lesson McDearmon learned early on.

He is a member of Local 4070, which was chartered less than a year ago in July 2015. Their size and strength are growing steadily and correctional staff are negotiating their first contract with management. When the local secretary position became available, McDearmon jumped at the opportunity to make a difference.

“We’re happy to have him on board with us,” said Local 4070 President Adam Werner. “It is an exciting time to be part of the entire labor movement.”

McDearmon gets to learn about everything that he and his coworkers' union does. Besides taking notes for union meetings, he gets to work with the treasurer on their budget and work with fellow members on ideas to build a better worksite.

"Matt is a great example of what working people can accomplish when they come together in union," said AFGE President J. David Cox Sr. "Matt, Adam and all of our members at the Federal Bureau of Prisons are part of a movement that makes our prisons safer and protects our communities."

Over the last several decades, working people have felt the squeeze. It's harder and harder to find wages that can sustain a family, much less allow you to save for retirement. One big reason for the decline? Wealthy interests and corrupt lawmakers have made it nearly impossible for working people to join in union – if they're able to join at all. 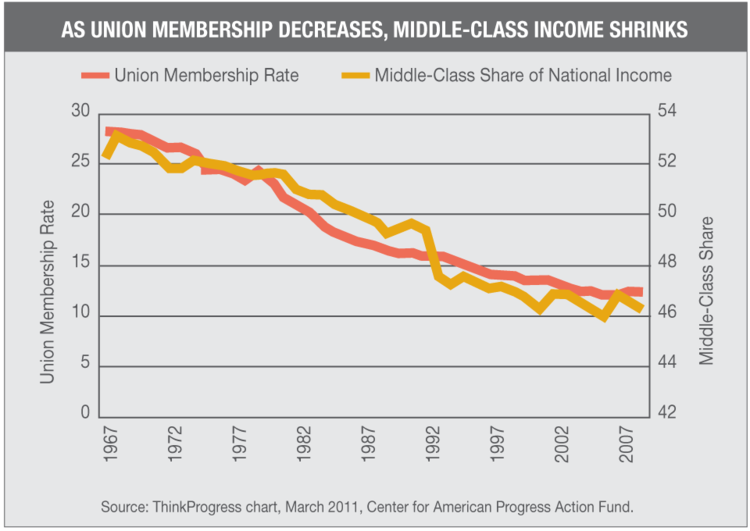 The right to join unions and create a collective voice has been severely undermined, thanks to this corrupt bargain between the rich and powerful and their cronies in Washington. The corporate onslaught against working people has resulted in the race to the bottom that prevents people from providing for their families.

Over the last several years, federal employees have been forced to pay $182 billion in lost pay and retirement benefits just so more tax cuts can be given to the wealthy and big corporations. Corporate-friendly lawmakers are also making it more difficult for public servants to come together and join in union to have a voice at work.

AFGE leaders and activists have had enough of it. That's why more than 700 of them convened in Orlando a few years ago to plot a bold future of the union. The resulting plan, Big Enough to Win, gave members the tools they needed to amplify the voice of public servants.

With a new focus on strengthening every local, organizing existing and new worksites, building our legislative power, and training leaders and activists, AFGE has been able to grow despite fierce attacks from anti-working people forces.

AFGE is the first union that McDearmon joined and he's proud to be a member. He said it's important for him to be active in the community he grew up in. That's a typical sentiment for most AFGE members.

As public servants, AFGE members recognize the duty and responsibility they carry to improve their worksites, their hometowns, their states and the nation as a whole. There is power in unity. Working people who speak up together can move mountains.

McDearmon will officially be recognized as AFGE's 300,000th member at the 2016 AFGE National Leadership Meeting in Philadelphia. With this honor, AFGE is also recognizing the countless hours and thousands of people who helped make 300,000 possible. In Philadelphia, the city where the United States first declared its independence, members have an incredible opportunity to write America's next chapter.

To learn how you can participate in the 2016 AFGE National Leadership Meeting, visit www.afge.org and look for the ad on the homepage.