Veterans and Department of Veterans Affairs employees rallied in downtown Milwaukee on October 3 to protest privatization and closure of VA hospitals.

Holding signs that read “Veterans for a Strong VA,” and “Staff the VA,” the group called on Congress to fully fund the system that veterans cherish, not dismantle and sell off it's infrastructure to for-profit hospital corporations.

“Veterans and veteran groups stand together to denounce the idea of privatization,” said Will Fischer, Marine Corps veteran, Purple Heart Recipient, and Executive Director of the AFL-CIO Union Veterans Council.

“Privatization is just another way of politicians saying they are ready to let their billionaire buddies make a profit off caring for our veterans."

"There’s work to be done, improvements to be made, but we’re moving in the right direction,” Fischer added.

“Shifting our care to a private system means fragmented care, gaps in treatment and missed opportunities to help our veterans,” said AFGE Local 0003 President Joe Junemann at the rally.  “I interact with veterans daily, talking about the care they receive, no one knows veterans like the VA.  It’s time to tell Congress, privatization means inadequate care.”

Koch-Funded Campaign against the VA 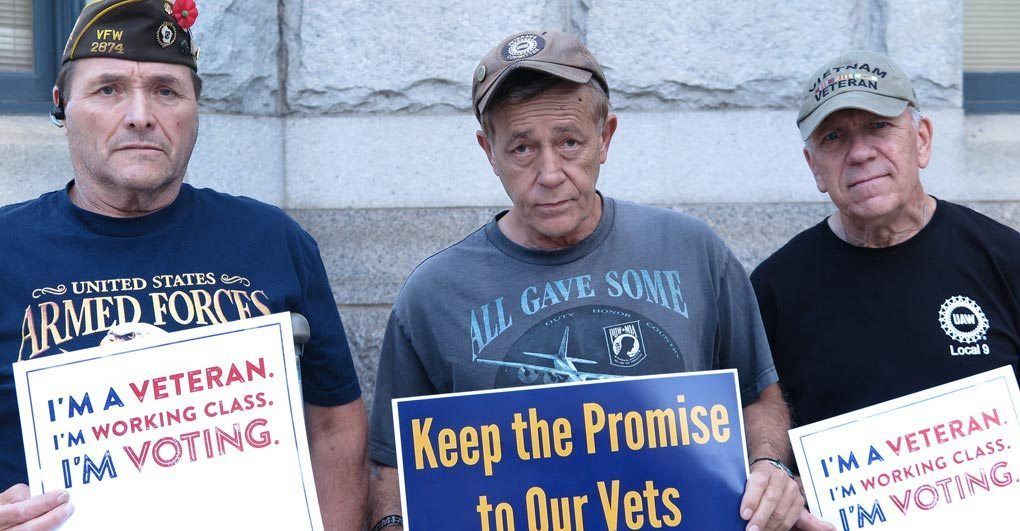 The Commission on Care released a final report on July 6 that recommended shutting down some VA medical centers and sending more veterans to the for-profit sector for their care. The Commission, a group that was created by Congress to recommend ways of improving veterans’ health care, included four individuals employed by private hospital corporations who would profit from privatization, an employee of the Koch Brothers' fake veterans group Concerned Veterans for America, and not a single mainstream veterans service organization.

Some Koch brothers-backed politicians on Capitol Hill and their pocket media pundits have been trying to privatize VA hospitals for years. They continue to do so despite countless independent studies that show VA hospitals consistently outperform their private counterparts. Academics, researchers, and veterans also have spoken repeatedly against privatizing the VA.

This country made a promise to care for our veterans when they return home, and we won't let big business break it.