Right to Work for Less Law Failed in Missouri 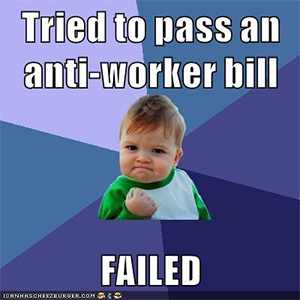 Congratulations to workers in the State of Missouri! An attempt to eliminate Missourians’ right to union representation has failed.

State lawmakers had passed a notorious right-to-work-for-less law that would have allowed non-union members to refuse to pay their fair share for better pay and benefits they receive because of collective bargaining and the work that unions do on behalf of their members. Gov. Jay Nixon vetoed it. State lawmakers tried to override his veto but didn’t have enough votes.