A Look into Black History and Civil Rights Through Photos

Washington, D.C. holds countless memories, buildings, and stories of those who have struggled tirelessly for equal rights. It’s a place for some of our greatest hallowed grounds for Black history, tracing to before the birth of our nation.

Eric Bunn Sr. toured a variety of significant spaces to better understand the rich history in the city he represents as national vice president for AFGE’s District 14, to reflect on those who have paved the way for freedom, and to continue the fight for civil and workers’ rights.

See this inspiring journey in photos: 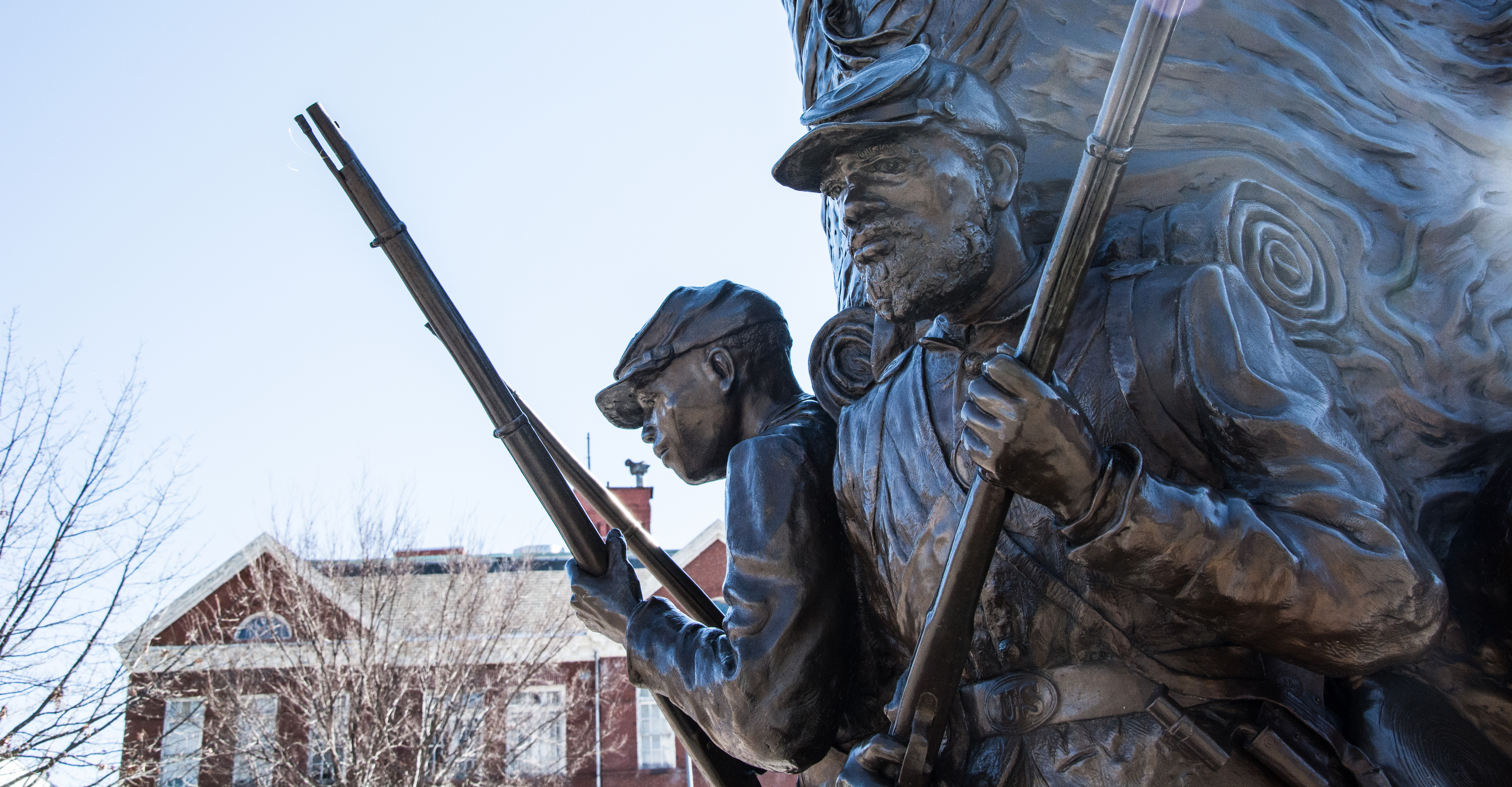 The memorial centerpiece is a nine-foot tall bronze statue called The Spirit of Freedom, commissioned by the D.C. Commission on the Arts and Humanities, was completed in 1997.

Black soldiers and sailors fought shoulder-to-shoulder with white soldiers for the Union during the Civil War, making up to 10% of the entire military force. Despite being brothers-in-arms, discrimination still occurred. They faced lower wages and restrictions on duties that resulted in a higher mortality rate than their non-Black counterparts. 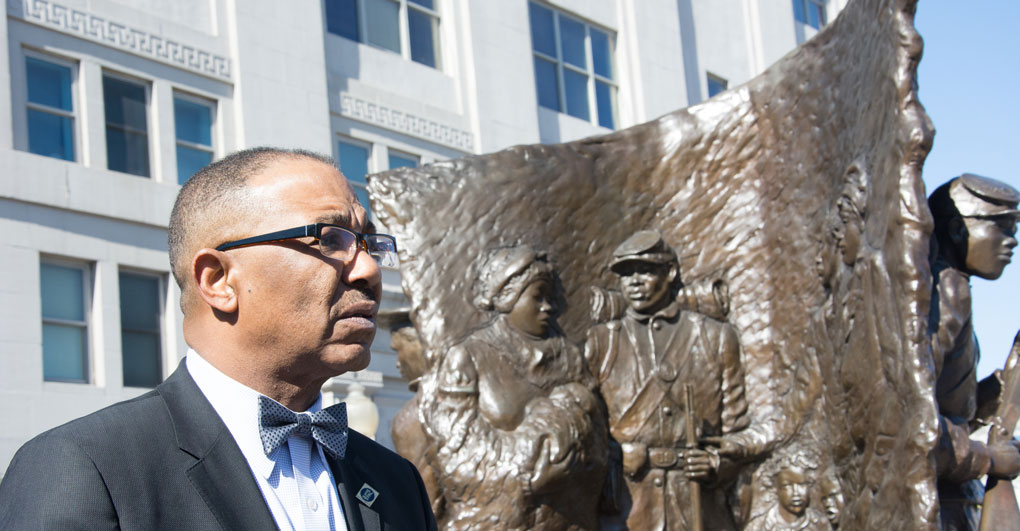 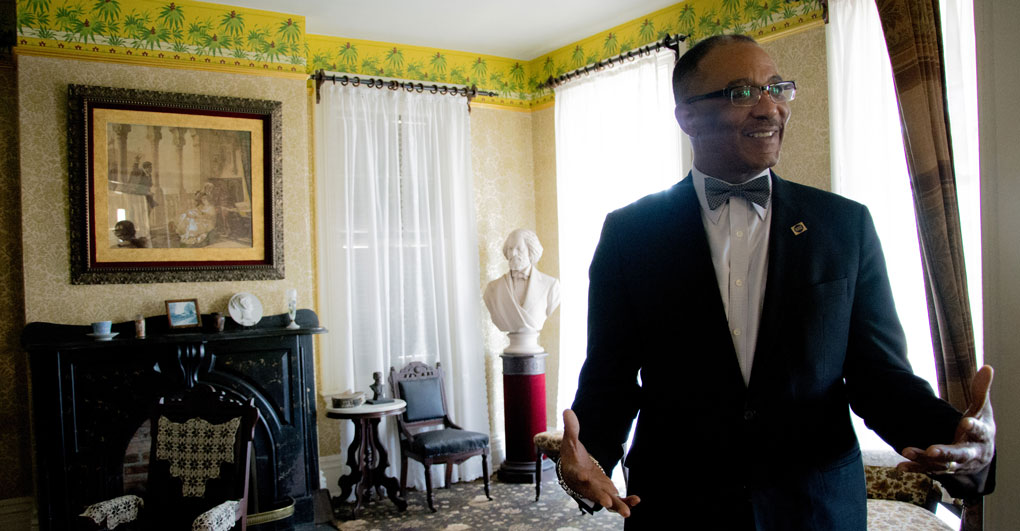 “Universal suffrage was Frederick Douglass’ longest fight. Today—despite attacks on voting rights across this country that target people of color and low-income communities—we are continuing the fight to ensure every American has the ability to exercise their right to vote,” Bunn said standing in Frederick Douglass’ infamous salon.

Frederick Douglass was an incredibly accomplished man: he escaped slavery in Baltimore when he was 20-years-old and became a dedicated civil servant, a union president, and one of the greatest leaders for equality our nation has ever known. 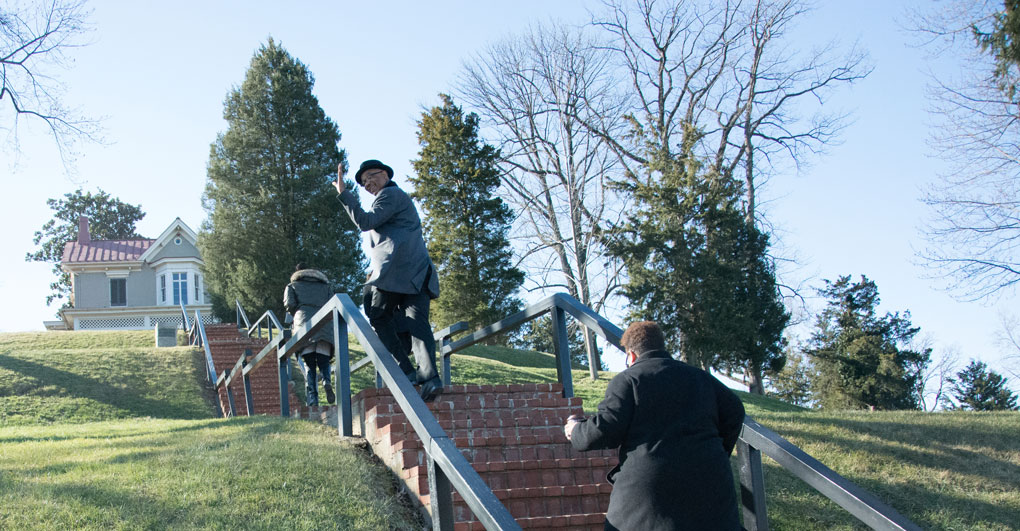 “Workers’ rights and civil rights are all tied together. We’ve never had one without the other,” said Bunn. “Frederick Douglass was an inspiring man and a bold example of true dedication to federal service, workers’ rights, and so many other just causes.”

After the Civil War, when Black men (and all women) were excluded from labor unions, Douglass helped establish the Colored National Labor Union to represent those who had previously been excluded. He was also a public servant who worked as the U.S. Marshal of the District of Columbia. As he often did, he made history in that role as the first African American confirmed for a presidential appointment by the U.S. Senate in 1877. 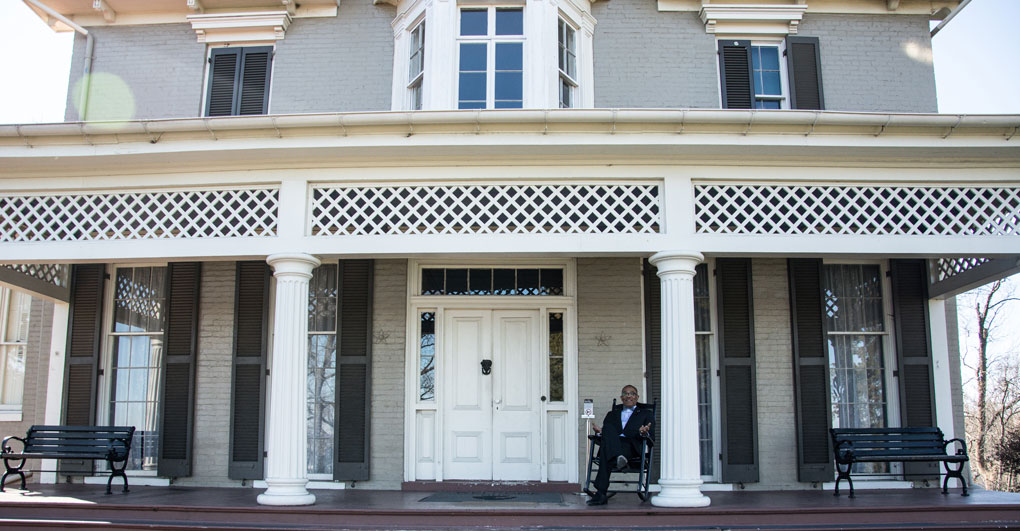 The home Frederick Douglass purchased in 1877 was once filled with laughter from his grandchildren and lively conversations in his parlor from Howard University students. It is now operated by the National Parks Service as a National Historical Site. 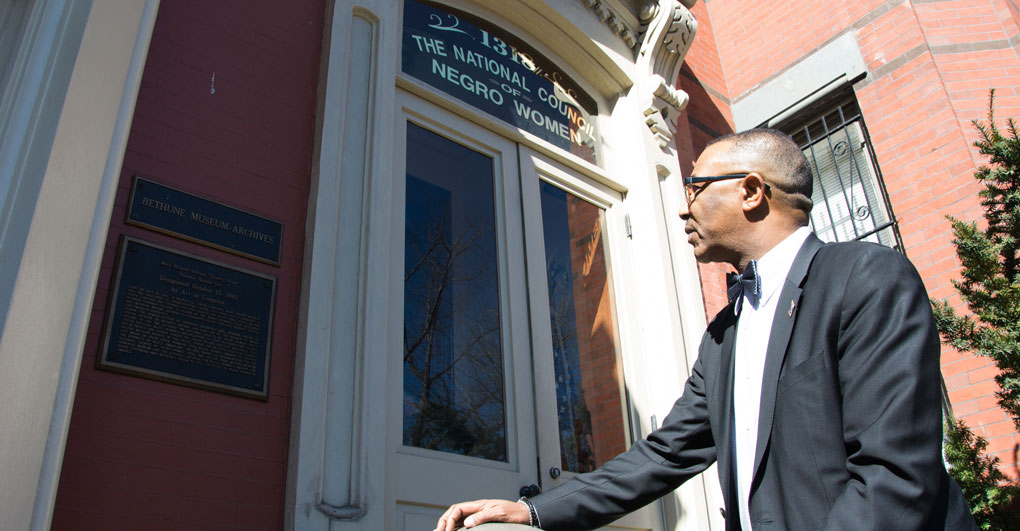 In 1943 McLeod Bethune was finally able to purchase a Victorian row house in the Logan Circle Historic District community in Washington, D.C. to serve as the headquarters of theNational Council of Negro Women. She was one of the first women to record history of Black women, archiving individual and collective stories in the carriage house in the backyard. It is still home to the National Archives for Black Women’s History.

Mary McLeod Bethune, a daughter of former slaves, was ready to harness the power of Black women when she started the National Council of Negro Women (NCNW) in her living room. In 1935, McLeod Bethune was already a tenured educator for young Black people. Eight years later, she purchased a three-story house, dedicating the first two floors as the NCNW’s headquarters while she lived on the third. 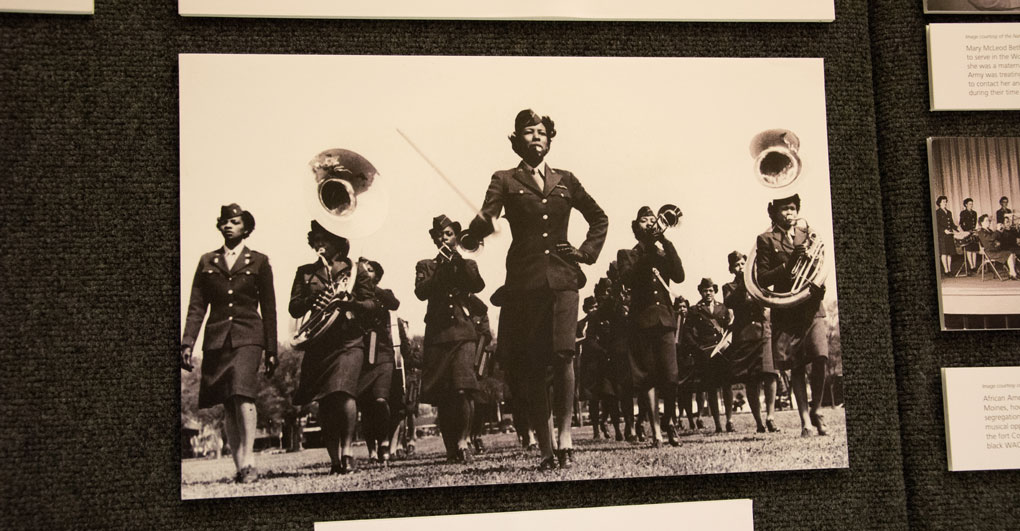 McLeod Bethune worked tirelessly to ensure Black women were able to serve their country in the U.S. military as part of her fight for equality for all.

The following year, President Franklin D. Roosevelt appointed Bethune as the director of the National Youth Administration’s Division of Negro Affairs. This historical appointment made her the first Black woman to head a federal agency. She continued on to lead his administration’s “Black Cabinet” and became involved in international diplomacy, attending the first conference of the United Nations in 1945. 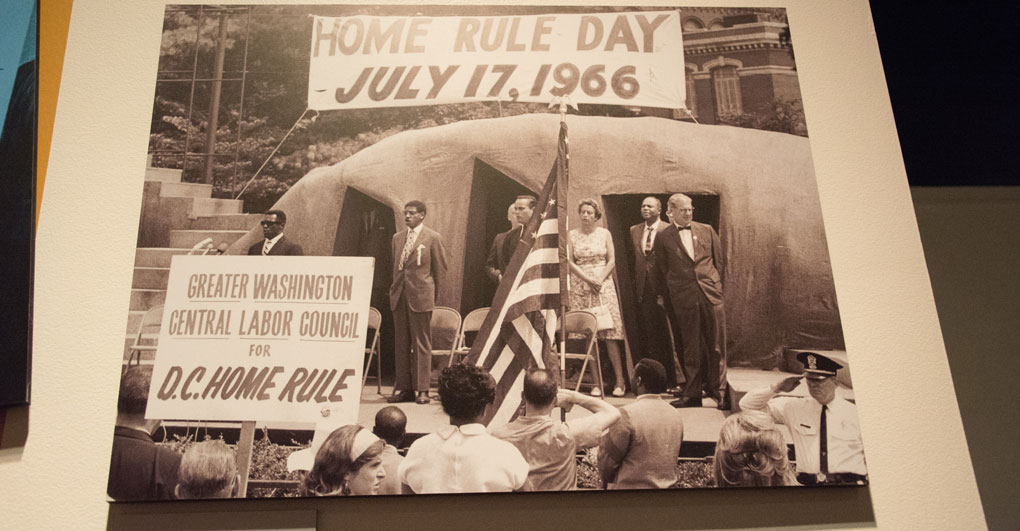 Labor organizations like the Greater Washington Central Labor Councillifted their voices to support rights for their city like D.C. home rule in 1966.

D.C.’s historic Anacostia neighborhood is home to the Smithsonian Anacostia Community Museum, dedicated to documenting and displaying the history of our nation’s capital. It’s latest exhibition Twelve Years that Shook and Shaped Washington: 1963-1975 examines the racial, political, and urban development of this important time in D.C. and American history. Social activists mobilized to confront longstanding injustices of poverty, race, gender, and D.C. home rule—and Black leaders like Walter E. Washington, Marion Barry, and Mary Treadwell were on the forefront of these efforts. 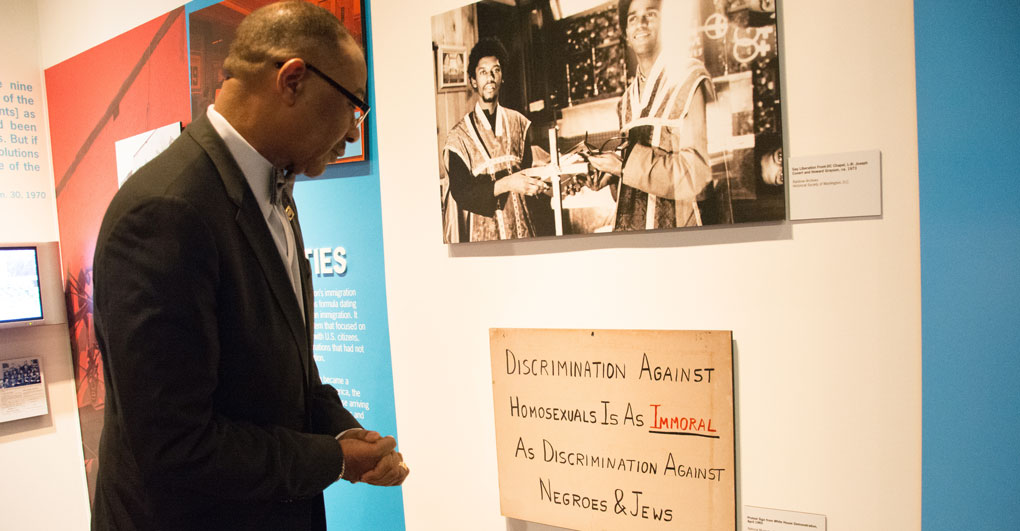 “Homophobia stems from the same place as racism and anti-Semitism—and we are still fighting for equality and unity just like we have been since the 1960s,” Bunn remarked as he reflected on a sign that was used in a White House demonstration in April 1965.

In the Shadows of Giants: The Martin Luther King, Jr. Memorial 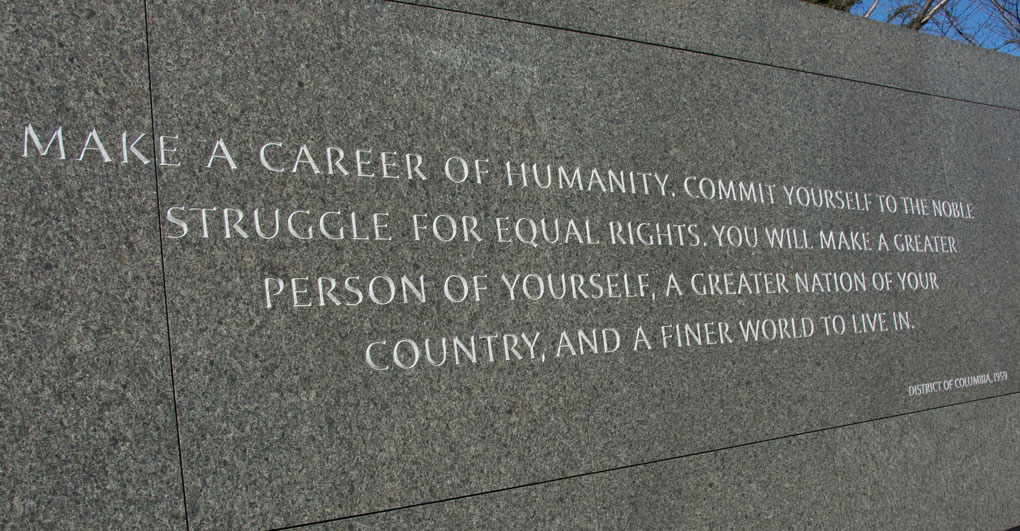 King’s words are engraved in the walls lining the memorial. They encourage people from every walk of life to mobilize for a better world, like this quote that speaks public servants everywhere: “Make a career of humanity, commit yourself to the noble struggle for equal rights, you will make a greater person of yourself, a greater national of your country, and a finer world to live in.”

“One of my favorite things about this memorial is that even when it is full of people, there is a sense of peace,” one of the National Parks Service guards explained during Bunn’s visit. 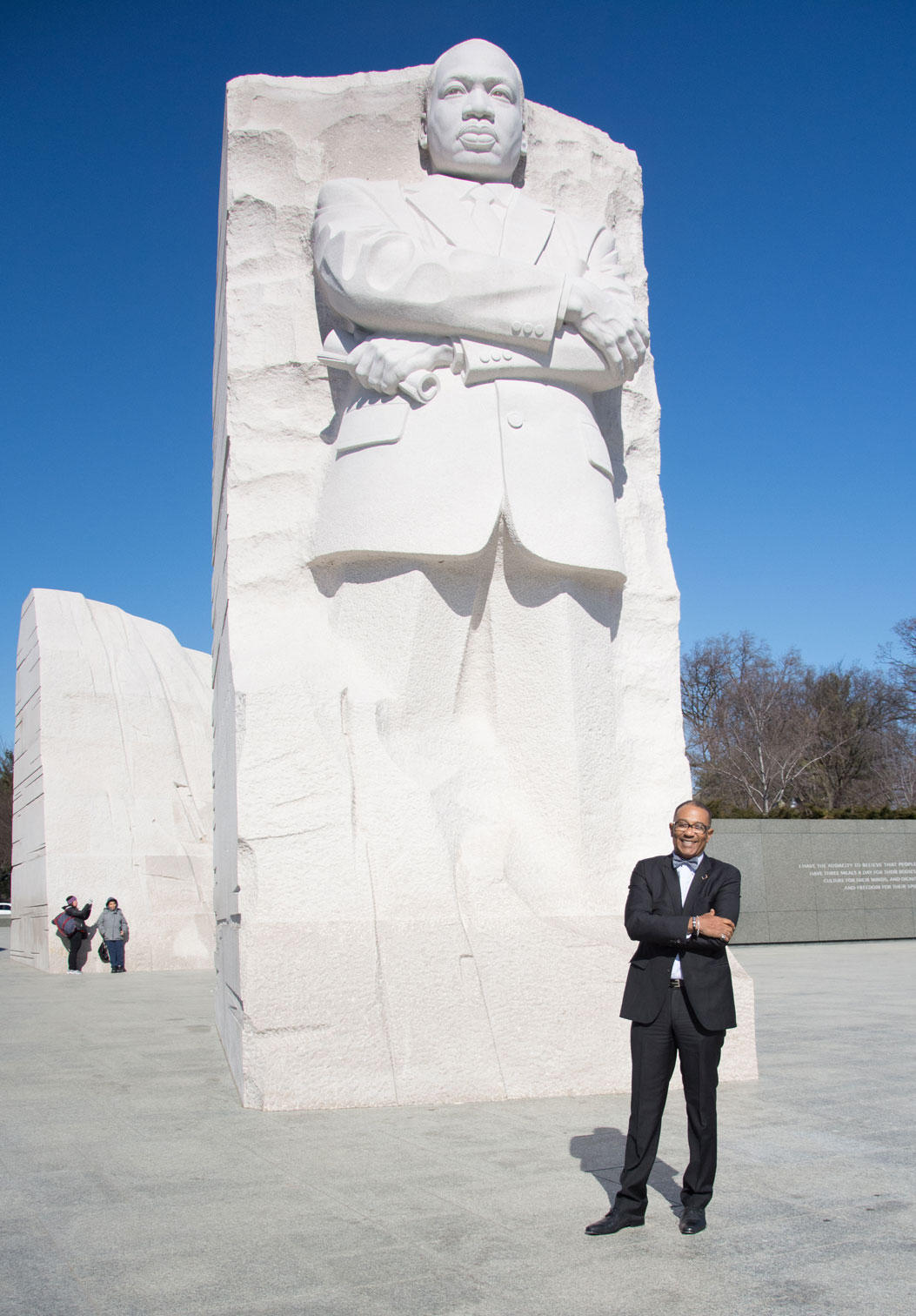 “It is so important to have a memorial of an African American leader on the National Mall because Black history is American history,” said Bunn.

The Martin Luther King, Jr. Memorial was dedicated on Aug. 29, 2011, and commemorated the 48th anniversary of the March on Washington for Jobs and Freedom. It’s the same march where King delivered his “I Have a Dream” speech which has become iconic of the rights movement. The memorial is the only one dedicated to a person of color on the National Mall. 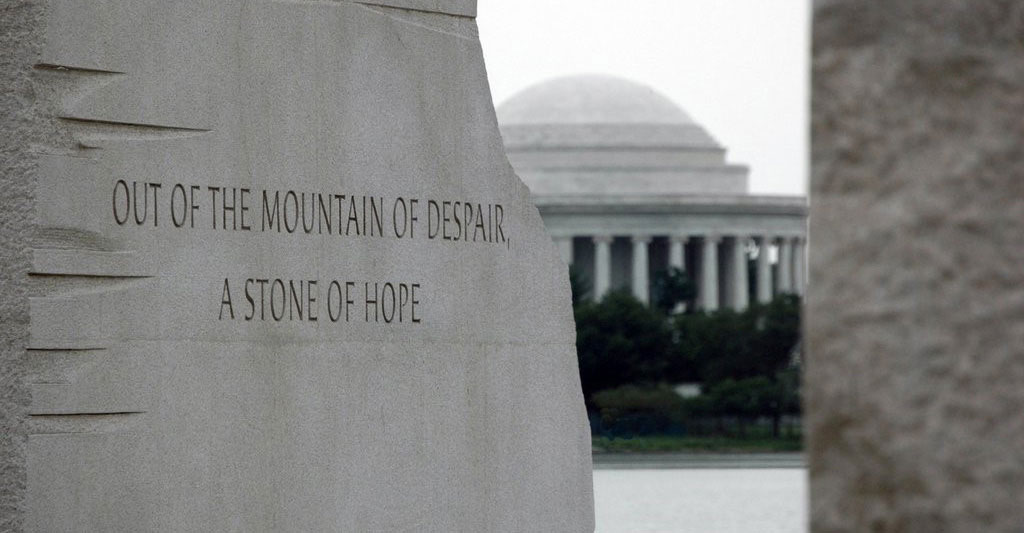 The inscription on the statue of Martin Luther King, Jr. reads “Out of a mountain of despair, a stone of hope.” Photo courtesy of @NationalMallNPS. 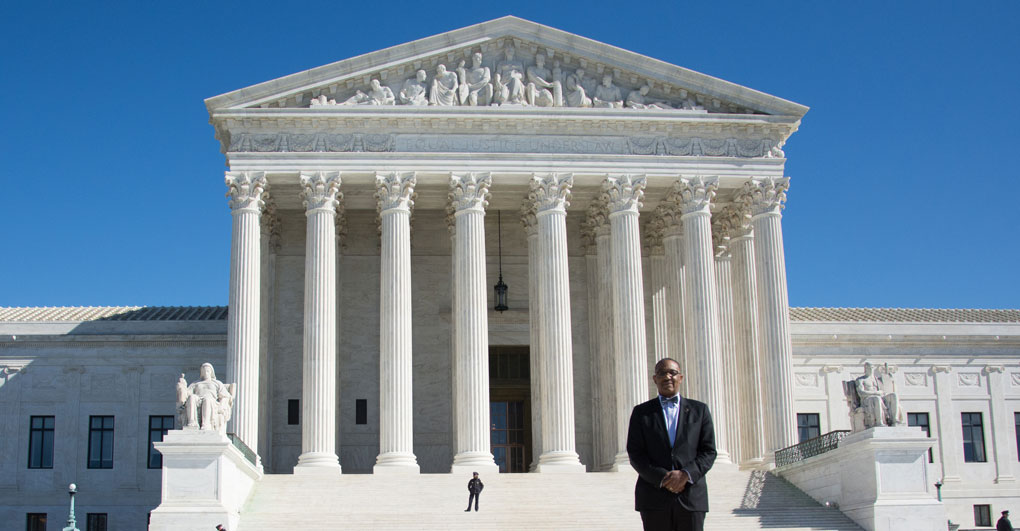 “Our history is woven into American history,” Bunn said on the steps of the Supreme Court. “Most people don’t know that enslaved people helped build so many of the landmarks of our city, like the White House, the Capital Building, and the Supreme Court.”

Despite progress, we still have a long way to go to reach equality and equity for every American. Some of the rights won in battles are threatened once again. There are forces in our political system, including the recent Friedrichs v. California Teachers Association case that attacked the ability for workers to unite together.

"Organized labor has historically been the door through which African-Americans entered middle class status. States with Right to Work laws have been shown to have lower wages, lower rates of health coverage, higher poverty and infant mortality rates, less investment in education and higher workplace fatalities," recently reported the United Auto Workers in the the Detroit Free Press.

“The Supreme Court is still in a position to oppress Black people," noted Bunn on the steps of the highest court in the land, looking towards the horizon.

Looking Toward the Future: Smithsonian National Museum of African American History and Culture 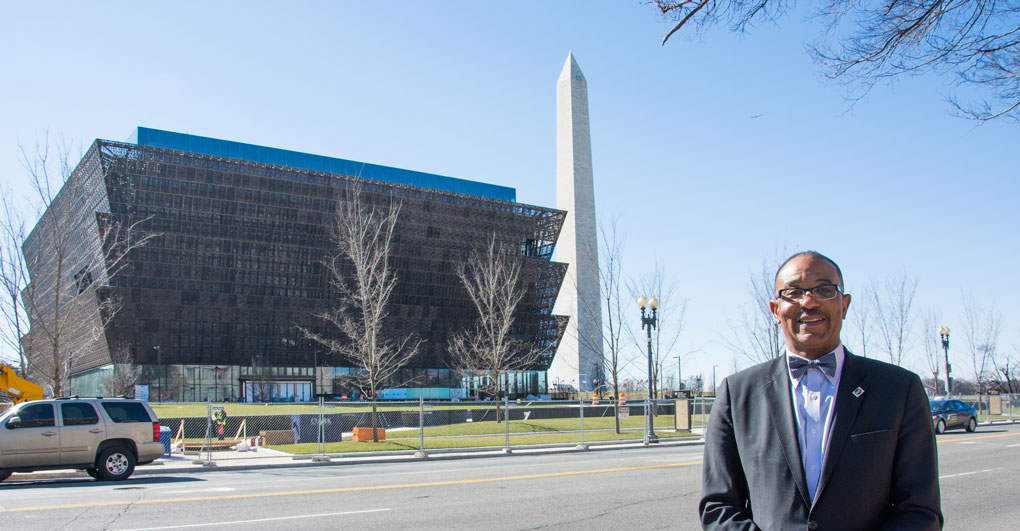 “After touring so many rich and historical places, I am hungry for more—for more education, for more awareness, and for more mobilization,” said Bunn.

“We are prepared to offer exhibitions and programs to unite and capture the attention of millions of people worldwide. It will be a place for healing and reconciliation, a place where everyone can explore the story of America through the lens of the African American experience,” said Lonnie Bunch, the museum’s founding director, in a statement this year.

As we look to the future, the keynote speaker at the 2016 Black History Luncheon remarked that there are three tools we need to accomplish even more: commitment, courage, and faith.