TSA officers overwhelmingly accepted the tentative collective bargaining agreement between AFGE and TSA. This ratification announcement comes nearly a year after both parties failed to reach a full agreement in December 2015. In August 2016, the AFGE bargaining team began a second round of negotiations to fight for much-needed workplace rights and job security for TSA officers.

“We went back to the table to ensure the voices of the 42,000 officers we represent were fully heard,” said AFGE National President J. David Cox Sr. “There’s still a long way to go for TSA officers to have the full rights as other federal employees, but this contract improves some terms and conditions of employment.”

TSA officers rejected the initial agreement citing policies that led to low morale and poor working conditions. More than 85 percent of TSA officers who voted approved ratification of the most recent contract. The new agreement will be implemented 30 days after December 8, 2016.

Not only did TSA officers endure a hard negotiation process this summer, they also faced increased air travel at airports nationwide and low employee morale at the workplace. Even though they were overworked and understaffed, TSA officers made sure hundreds of thousands of Americans not only made it to their destinations safely, but didn’t have to stand in oppressively long lines.

“This summer, TSA officers showed their professionalism and commitment to keeping the public safe when air travel was at a record high— and they did it all while their rights on the job hung in limbo,” said Cox.

TSA officers rallied at airports and TSA headquarters to call for a fair contract and bring attention to the workplace issues that caused the long lines— funding shortages, poor workplace treatment, and a high turnover rate. They also appeared in several news media outlets to help bring national eyes to the daily issues facing TSA officers at work. In July, AFGE TSA Council 100 Vice President Vaughn Glenn said "We're professionals, and we're going to do our jobs — despite high stress and low pay" in a column he wrote for the Washington Post. 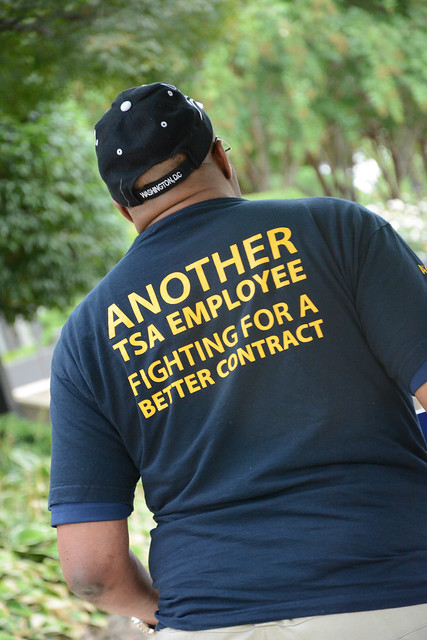 Despite staff shortages and workplace mistreatment, TSA officers are detecting more and more dangerous weapons at the nation’s airports. Every day they stop an average of 8 guns a day from getting on our airplanes. Having stopped 3,104 firearms from getting on planes this year alone, they’ve already discovered more than last year’s record-breaking numbers.

Though the new contract has been ratified, there are several articles that have not been agreed upon, including rules for the pay-for-performance system, awards, grievances, arbitrations, and investigations. A panel of independent arbitrators will decide the outcome of the outstanding articles.

“TSA Officers are veterans, former law enforcement officers, and middle class working people who shoulder a tremendous responsibility to keep the flying public and our nation safe,” said AFGE TSA Council 100 President Hydrick Thomas. “The people who stop an average of eight guns a day from getting on our planes deserve to be respected, supported, and valued by TSA management.”

AFGE will continue to educate TSA officers about their rights, advocate for them within the agency, and fight to make sure their concerns are heard on Capitol Hill.