AFGE has reached agreement with the U.S. Department of Agriculture on provisions designed to mitigate some of the impact of the forced relocation of employees at two USDA agencies from Washington to the Kansas City region.

Under the agreements signed by both parties Aug. 12, employees at the Economic Research Service (ERS) and National Institute of Food and Agriculture (NIFA) who agree to relocate to Kansas City will:

“This is certainly a positive development that could encourage more employees to relocate, but it does not make up for all the anxiety and anguish that employees have been going through since this relocation was first announced,” said AFGE National President J. David Cox Sr. “At the end of the day, we remain convinced that this forced relocation is bad for employees, bad for the agricultural community, and bad for taxpayers. But we are determined to effectively represent these employees, whether they’re in Kansas City or Washington.” 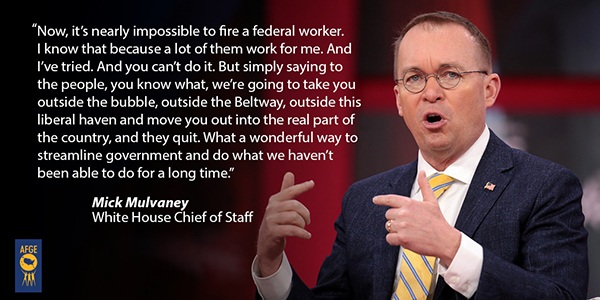 The U.S. Department of Agriculture came up with an elaborate explanation of why it needed to relocate hundreds of scientists and researchers outside the Washington, D.C. area. They said the relocations are done to improve operations. We knew it was a lie, and now a high-ranking administration official has confirmed it.

At a political event in South Carolina on Aug. 2, White House Chief of Staff Mick Milvaney told the audience that as part of the administration’s efforts to “drain the swamp,” USDA is moving two offices outside the Washington, D.C. area, and the relocation is a “wonderful way” to get rid of these scientists and researchers.

“Now, it’s nearly impossible to fire a federal worker. I know that because a lot of them work for me. And I’ve tried. And you can’t do it. But simply saying to the people, you know what, we’re going to take you outside the bubble, outside the Beltway, outside this liberal haven and move you out into the real part of the country, and they quit. What a wonderful way to streamline government and do what we haven’t been able to do for a long time.”

AFGE President J. David Cox hit back by pointing out the obvious inconsistencies between the official reason for the move and what the administration was telling donors and political supporters in an unintentionally candid moment.

“Mick Mulvaney’s comments confirm what our union has been saying all along: the administration’s decision to transfer hundreds of USDA jobs from D.C. isn’t about helping federal employees do their jobs better or delivering better services to the American taxpayer. Their goal is to drive out hardworking and dedicated civil servants and silence the parts of the agencies’ research that the administration views as inconvenient.”

The USDA is in the process of moving most employees of the Economic Research Service (ERS) and the National Institute of Food and Agriculture (NIFA) to a yet-to-be-determined location in the Kansas City region. But the USDA inspector general said these moves violate 2018 and 2019 appropriations laws, which prohibit the department from relocating an office or employees without congressional approval. A House-passed Agriculture appropriations bill for fiscal 2020 has the same language.

“In summary, we found that the Department may not have the budgetary authority to obligate appropriated funds related to the relocation of ERS offices. The Department did not receive Congressional approval prior to obligating funds related to such relocations; this may have violated Section 717(a) of the Omnibus Act and the ADA,” said the IG in a report released this month.

“We also found that the Department did not have the budgetary authority to obligate appropriated funds related to the relocation of NIFA offices because it did not meet the 60-day reporting deadline requirement in Section 753; this also may have violated the ADA. Further, pursuant to Section 717(a), if the Department’s relocation of NIFA offices requires the reprogramming or transfer of funds, the Department must notify in writing and receive approval from the Committees on Appropriations of both Houses of Congress at least 30 days in advance of the transfer or reprogramming of such funds.”

“We all knew this move made no sense and was driven by ideology over science,” said Sen. Chris Van Hollen, D-Md. “Now, thanks to this new inspector general report, we also know that it was potentially illegal. Secretary [Sonny] Perdue has some serious questions to answer, and this fight is not over.”

USDA responded that the committee approval requirements are unconstitutional.

There is also a USDA department regulation regarding realignment and relocation that would have restricted the relocation of ERS and NIFA, but USDA told the OIG that this regulation did not apply in this case, solely because the idea for these relocations came from the Secretary, and not from NIFA or ERS themselves.

The administration is sending removal letters to hundreds of scientists, researchers, and other employees who declined relocations, which the agency hopes to accomplish by Sept. 30.

To many employees, this is a move to politicize their research and retaliate against them for their studies that contradict the administration’s political positions on issues like climate change and tax cuts. Many researchers and scientists have quit since news broke last year about the relocation plan.

The resulting brain drain will severely damage NIFA and ERS, and it will take years to rebuild the highly specialized workforce at these agencies.

AFGE calls on USDA to stop the planned relocations until the department is in compliance with both the spirit and the letter of the law and in accord with USDA’s own published regulations, which should be interpreted as binding the Secretary along with everyone else at USDA.

Congress should also make it clear going forward that USDA does not have the authority to carry on any similar relocation without congressional approval, and neither does any other department or agency of the federal government.