Y.O.U.N.G Workers on the Rise

The future of the labor movement depends upon the active participation of younger generations, and if the current trends in our union continue, our future is bright.

Since the very first meeting of Y.O.U.N.G (Young Organizing Unionists for the Next Generation) AFGE in 2009 and the subsequent formation of national and local committees in 2012, we have made major inroads on the young membership organizing efforts and the strength of our program as a whole. As a result, all districts have seen their young membership grow. In 2009, we had 53,501 members who were under the age of 40. By the middle of 2018, the number rose to 62,971. 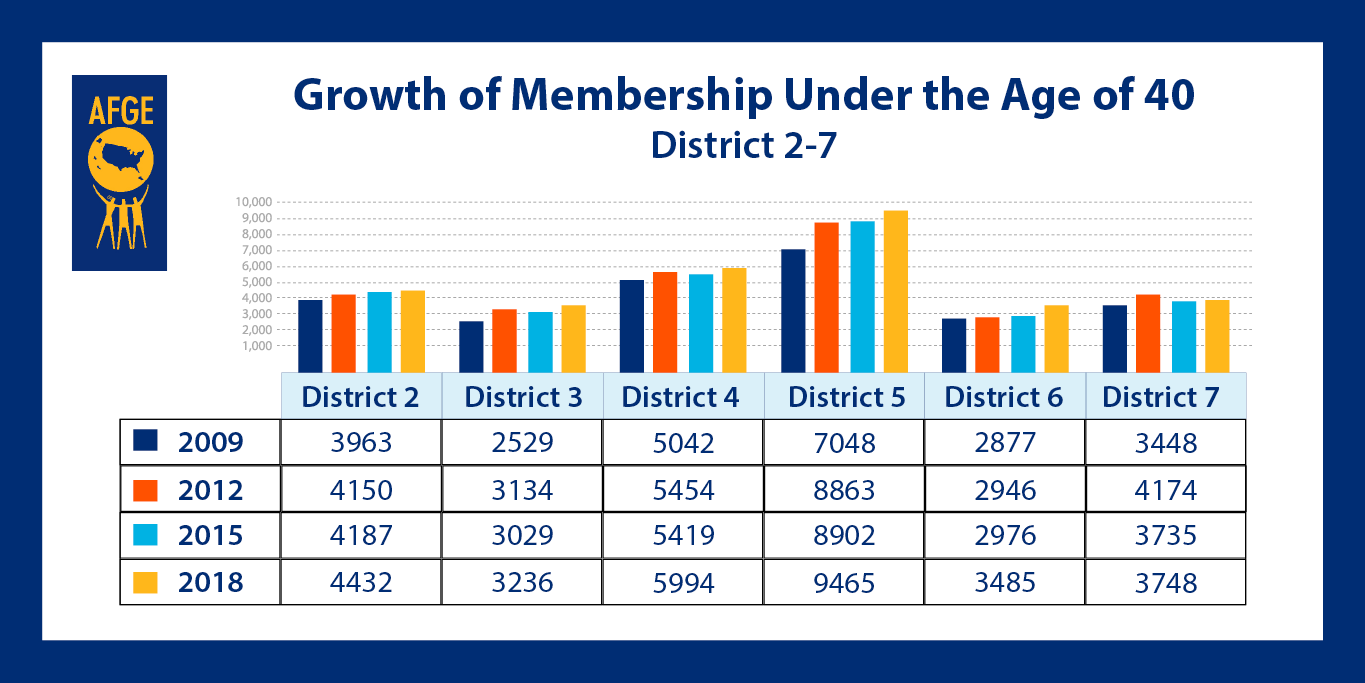 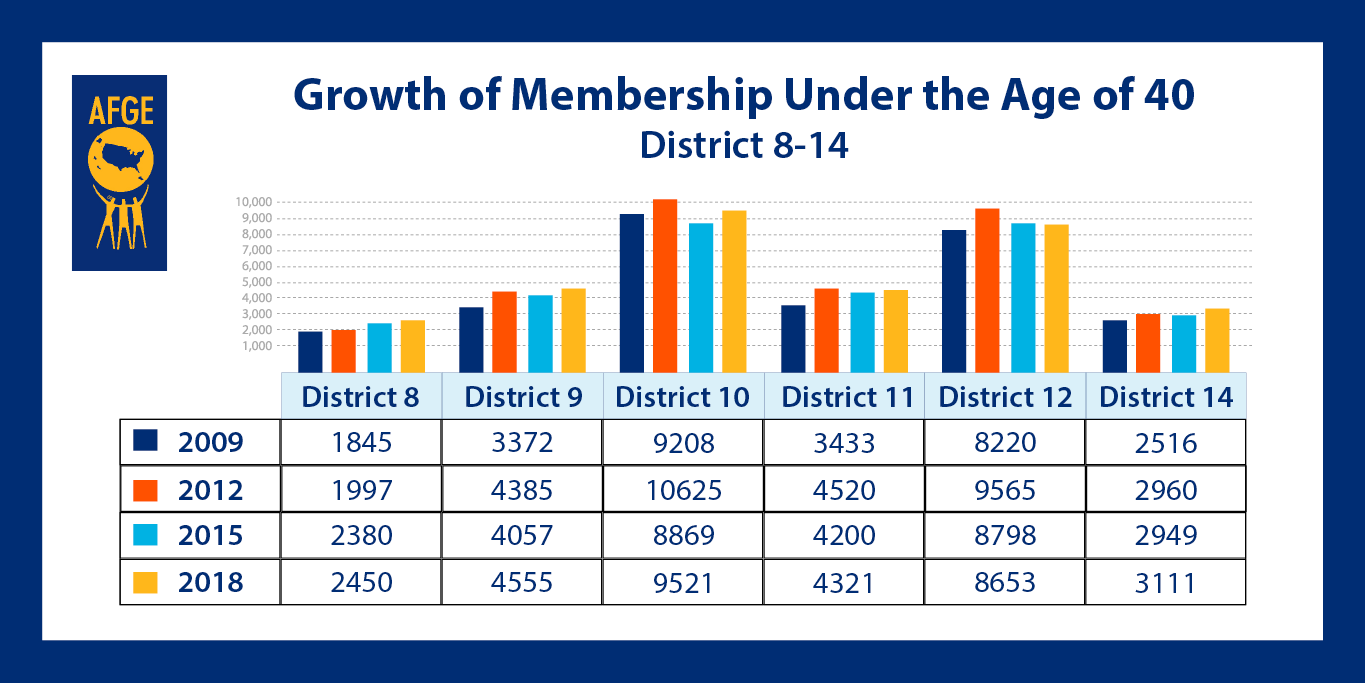 Our union’s young membership growth has contributed to the overall growth of union membership among young workers in the labor movement. According to the Bureau of Labor Statistics, the number of union members rose by 260,000 in 2017, three fourths of whom were workers under the age of 35. The AFL-CIO did a summary of the report and mentioned our union by name as one of the four unions that drove growth in the labor movement.

Through our Y.O.U.N.G. AFGE program, managed by the Women’s and Fair Practices Departments (WFP), we educate young workers about the labor movement, leadership roles, political engagement, communications, mobilization, organizing, and other issues important to young workers and our fight for all workers.

A few other notable trends in our union

Councils with the largest growth since 2009:

The following states more than doubled their young members

Our union not only focuses on recruiting young workers but also encourages them to grow and strive for leadership positions. We have been successful on that front.

In 2009, only 124 members under the age of 40 held union leadership positions. In 2018, the number shot up to 675. This is a true testament to our union’s commitment to growing the federation and young workers’ commitment to carrying the torch.

“This is a stepping stone to everything else in the federation,” John Mabane, AFGE Local 2109 2nd vice president, said at a recent meeting of Y.O.U.N.G members at the union’s 2018 convention. “Wherever you want to go, it starts with grassroots organization.”

Indeed, many of the young workers attending the meeting are either presidents or vice presidents of their locals.

“We have come a long way since we’ve started,” said Jim Rihel, chair of the national Y.O.U.N.G. AFGE Committee and president of Local 940 out of the 3rd District.

According to Rihel, the committee spent the last two years organizing new members under 40, which has also been a big push at the AFL-CIO, and that our union will be losing opportunity if we don’t continue to do so.

Francis Nichols, III, 14th District Y.O.U.N.G AFGE coordinator, agrees. “We are here to secure the future of the federation,” he said.

The Cadillac of all young worker programs

Because we have so much success recruiting and mobilizing young workers, other organizations including the AFL-CIO model their committees after us. They often seek our input on how to create and improve their programs.

“This program is the Cadillac of all young worker programs,” WFP Program Coordinator Jorae Williams said at the Y.O.U.N.G AFGE meeting.

Williams added that a main factor contributing to our success is the fact that our national Y.O.U.N.G. AFGE Committee is out there doing what it’s supposed to do – working with districts, councils, and locals to improve the way we reach out to and recruit young workers.

Power to the polls

Another good reason to engage young workers is their power to shape elections.

Our union recognizes young workers’ drastically increased power at the polls, and so we want to make sure young AFGE members are not left out of the conversation on how our government can work for us and continue to provide good, stable jobs to support young working families.

“Young people are instrumental in turning the tide at the ballot box,” Williams said. “They are excited. They want to be a part of this movement as a whole.”

But our Y.O.U.N.G AFGE program wouldn’t be where it is today without the amazing work and vision of our mentors – former and current union leaders who recognize the important role younger generations play in sustaining and growing the labor movement.

Union leaders like Joe Malizia, Local 940 vice president and former president, recognize that the future of his local and the entire labor movement lies in the hands of young unionists who are passionate, smart, energetic, knowledgeable, social media savvy, and know how to reach out to their peers. He found all these qualifications in his then vice president Jim Rihel, who had proven himself to be effective as an advocate for the union and employees.

As Malizia was getting ready to retire – he served as local president for 20 years and as vice president for 10 years before that – he realized his succession plan needed to start now when he could still provide mentorship for the new president, so he took a leave of absence as president and made Rihel president. It was a strategic move on his part. Management had been giving Rihel a hard time about representing his co-workers. By making Rihel local president, Rihel was guaranteed official time – certain hours in his work days – to continue his great work.

“Jim has the knowledge, the attitude, the talent to be a leader for this organization, so the best thing I thought for us was to give him that opportunity to fly,” Malizia said. “I had no qualm about turning the presidency over to him because I knew it would be in good hands.”

Join our Y.O.U.N.G AFGE program and help reposition the labor movement for the future!