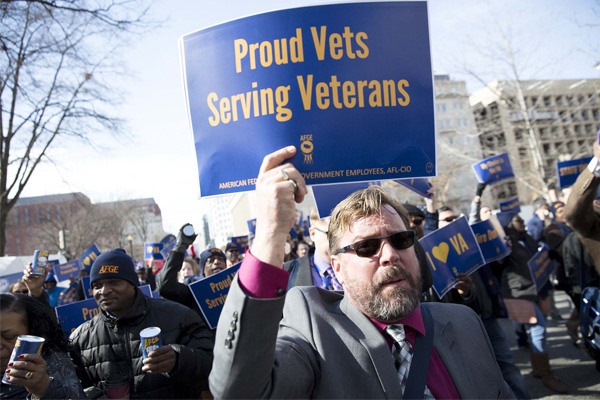 WASHINGTON – In yet another rebuke of President Trump’s anti-democratic, anti-worker executive orders, last week the Department of Veterans Affairs rescinded the order denying employees their representational rights at work.

Previously, the order had severely limited union officials’ access to office space, equipment, and official time to represent workers – but it was struck down on August 24 by the U.S. District Court for the District of Columbia. Judge Kentaji Jackson Brown ruled that the Trump administration’s May 25 executive order on official time violated the U.S. Constitution and the separation of powers as established in lawand were invalid. And on Wednesday, August 29, the Office of Personnel Management directing agencies to rescind the provisions of the orders that were enjoined.

The VA, which had indicated to some locals that they would not abide by the court’s decision, now has officially begun to comply.

“While we knew the president and his administration overstepped when they issued their union-busting executive orders in May, it’s a welcome relief seeing agencies comply with existing collective bargaining agreements and court orders,” said American Federation of Government Employees National President J. David Cox Sr. “The men and women who care for our nation’s veterans at the VA had taken hit after hit since President Trump took office. But in the last month they’ve had their rights at work restored and anti-labor laws struck down, showing that we are in the right and have the law on our side.”

The decision by the VA to fall in line with Judge Jackson’s decision comes less than a week after an independent arbitrator ruled the VA was found to be in violation of the existing Master Agreement between the agency and AFGE by improperly implementing the VA Accountability Act. That decision, when finalized, will allow workers who had been improperly disciplined to be rehired, receive backpay, and will prevent further misuse of the so-called Accountability Act.