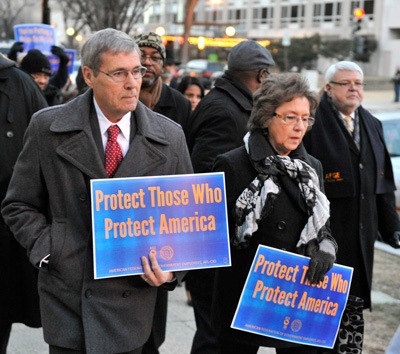 "I am deeply saddened and angered by the court's decision to sentence Jessie Con-Ui to life in prison for the second time," Young said. "Con-Ui was already sentenced to life in prison when he targeted and viciously murdered Officer Eric Williams at USP Canaan. By giving him the same punishment for this murder, instead of sentencing him to death, the court is telling the world that correctional officers' lives are worthless and expendable."

"This sentence shows violent inmates that they can attack correctional officers with impunity, and won't receive a harsher sentence for their crimes. This unfortunately already happened with correctional officer Jose Rivera - where two inmates serving life sentences targeted and murdered a two-tour Iraq war veteran in the line of duty, only to plea bargain for a second life sentence. Now, both the Rivera family and the Williams family must mourn the loss of their loved ones, knowing that their killers could potentially kill another officer as they serve their sentences."

"I, and the rest of the Council of Prison Locals, will continue pushing for the passage of the Thin Blue Line Act. I want to ensure that any inmate who targets a law enforcement correctional worker or first responder is brought to justice. We will also continue to push for increased funding for federal prisons, to ensure that we have adequate staffing and equipment to keep our officers safe on the job."

The Thin Blue Line Act, which passed the House of Representatives and is now awaiting a vote in the Senate, proposes that the murder of a law enforcement officer, or other first responder would be an aggravating factor in sentencing a convicted offender. To learn more about the Thin Blue Line Act, and how AFGE is standing up for correctional workers, visit the Safe Prisons Project page here.