Every day, the men and women of our federal Bureau of Prisons are tasked with one of the most dangerous jobs in the country: to keep our communities safe by supervising and rehabilitating the worst criminals in our society.

These correctional workers serve our country with distinction, and go into work every day knowing that they may return home to their families beaten – or may not return home at all.

Far too often correctional workers fall victim to violent inmate assaults. Over the last few years we have seen inmate-on-worker assaults become more common. In the most extreme cases we have seen correctional officers murdered by an inmate – like Correctional Officers Jose Rivera and Eric Williams. 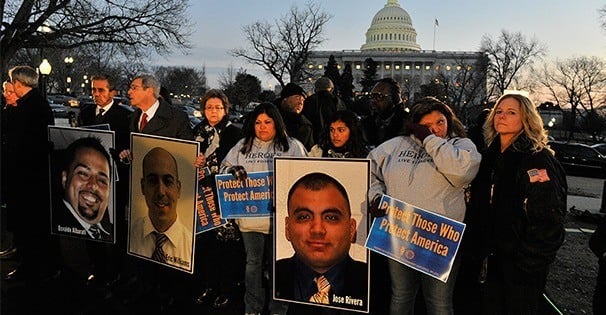 This was the case with Jose Rivera, an Iraqi War veteran and young correctional officer at USP Atwater in California. He was killed by two of his inmates, who overpowered him and viciously stabbed him to death. When it came time for them to be punished for their crime, one of the perpetrators had already been serving a life sentence. Once convicted, they accepted a plea deal to serve another life sentence. Jessie Con-Ui, the inmate convicted of killing Eric Williams at USP Canaan, was also given a second life sentence for his crime.

In 2014, AFGE held a vigil in front of the U.S. Capitol to advocate for better protections for Correctional workers. To navigate through the slideshow, hover over the image and use click the '<' and '>' to move to the left and right.

Our correctional workers and their families deserve to see justice done. That’s why AFGE supports the Thin Blue Line Act (HR 115). The bill would make it law that anyone responsible for murdering a correctional officer or other first responder would be more strongly considered a candidate for the death penalty.