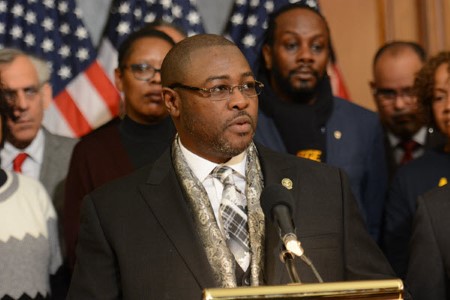 Union calls for passage of legislation encouraging death penalty for those convicted of killing correctional workers, firefighters, and first responders

WASHINGTON – The administration’s decision to resume the use of capital punishment for federal death row inmates will bring justice to their victims and resolution to their families, the union representing federal correctional officers said today.

“Inmates sentenced to death have committed some of the most horrific crimes unimaginable. Their victims and families deserve justice, and justice denied is no justice at all,” AFGE Council 33 President Eric Young said.

“Likewise, justice is also denied when convicted criminals sentenced to life in prison are allowed to target and kill correctional workers without any way to hold them accountable,” Young said. “Three federal correctional officers have been murdered in recent years by inmates, two of whom were already serving life sentences for other crimes. Without the death penalty, there is no deterrent to prevent further crimes on our law enforcement professionals.”

The Council strongly supports both Thin Blue Line Act (H.R. 99 and S. 1508) and Eric’s Law (H.R. 3980 and S. 2264). The Thin Blue Line Act would make killing a correctional worker, law enforcement officer, firefighter, or other first responder an aggravating factor in death penalty determinations. Eric’s Law would permit prosecutors to impanel a second jury for sentencing if the first jury fails to reach a unanimous sentencing decision in federal death penalty cases. The law is named for Eric Williams, a federal correctional officer who was savagely murdered in 2013 by an inmate serving a life sentence for murder at U.S. Penitentiary Canaan in Pennsylvania.