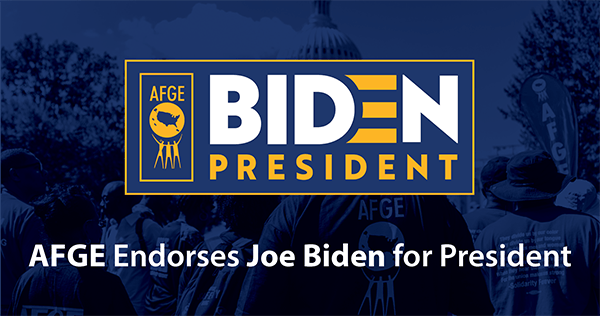 Biden overwhelming choice of AFGE members according to internal polling

WASHINGTON – The largest union representing federal and D.C. government employees, the American Federation of Government Employees, AFL-CIO (AFGE), today announced its endorsement of Joe Biden for president in the 2020 election.

The endorsement follows a months-long endorsement process that included an online poll open to every AFGE member, a scientific poll of AFGE members, straw polls at AFGE events, and the opportunity for each candidate to respond to a questionnaire addressing important issues to government workers.

“For AFGE members who are concerned about providing for themselves and their families, protecting their rights at work, being able to perform their job without undue political influence, and ensuring the security of their pay, benefits, and retirement, Joe Biden is the clear choice. And for these reasons, AFGE is proud to endorse Joe Biden for president of the United States.

"In the polls that we have conducted, the overwhelming majority of our members expressed support for Joe Biden as the nominee. When every member was given the opportunity to vote, our members supported Joe Biden over Donald Trump by over 30 points – 58.4% for Biden compared to 28% for Trump. In our scientific poll, in which results were weighted to accurately reflect the demographic makeup of our union, the results were even more dramatic. In that poll, Biden led among AFGE members by 45 points, 62% for Biden over 17% for Trump.

“Joe Biden is the clear choice of the vast majority of AFGE members in this election because he speaks to the issues our members care most about.

“In his responses to AFGE members’ questions, Vice President Biden committed to roll back the assaults on government workers’ rights on the job, to protect their benefits and retirement from cost-sharing schemes that benefit insurance companies and big banks but hurt workers, and to make sure government workers are paid fairly and treated with dignity, fairness and respect.

“Over the course of his campaign, Vice President Biden’s team has proactively reached out to AFGE to solicit policy proposals, and they have incorporated a number of AFGE priorities into the Vice President’s various policy plans.

“President Trump declined to respond to AFGE members’ questions through our presidential questionnaire, continuing his total disrespect for federal and D.C. government workers. His record speaks for itself.

“He issued three executive orders aimed at taking away federal workers’ rights to fair treatment and a voice in the workplace, diminishing the important work our members do for Americans. His administration has torn up negotiated union contracts and replaced them with management edicts. He has proposed pay freezes and benefit cuts for federal employees – proposals overridden with bipartisan Congressional support. He has attacked the integrity of career civil servants by repudiating standards of truth and science that are instrumental to protecting the health and safety of the American people. President Trump has corrupted the merit systems principles that underlie our apolitical civil service. And he was the architect of the longest government shutdown in history that sent hundreds of thousands of federal workers across the United States to food banks to feed their families while cavalierly denying vital services to Americans.”