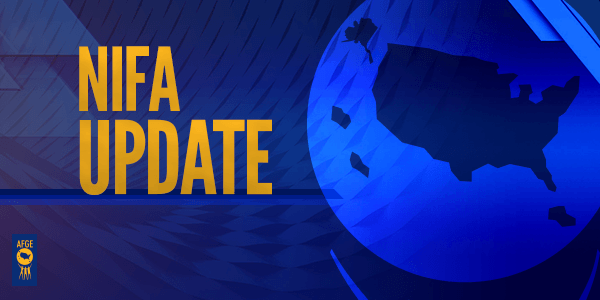 WASHINGTON – The U.S. Department of Agriculture’s National Institute of Food and Agriculture (NIFA) is projected to experience catastrophic employee attrition as a result of the short-notice move of 90% of all NIFA employees out of the National Capital Region, according to attrition data obtained and compiled by American Federal Government Employees Local 3403 as part of a summary of all employees.

Agriculture Secretary Sonny Perdue announced June 13 that approximately 294 NIFA employees are among the more than 550 USDA research employees scheduled to move to Kansas City on or before Sept. 30. Employees must respond to relocation orders by July 15, giving families too brief of a period to uproot and complete their move to an area where some school districts start the year on August 12. In addition, on July 3, GSA extended by one month until Aug. 7 the deadline to submit bids for the permanent location for NIFA and the Economic Research Service (ERS), meaning that employees will have to find housing and choose schools without knowing the location of their employer and even whether it will be located in Kansas or Missouri.

NIFA could expect that more than 70% of the employees being reassigned to temporary offices in Kansas City will refuse to relocate – mirroring results of an earlier analysis of ERS employees. Given the aggressive timeline to move all positions before the end of the current fiscal year, AFGE’s NIFA Local 3403 estimates that 71% of employees are certain they will not make the move to Kansas City, although 29% would be willing to consider relocation if AGFE demands such as a reasonable amount of time for employees to make arrangements for their families and housing were agreed to by the USDA.

While a fully staffed NIFA has 315 employees, NIFA has lost 23 employees since late February, leaving the agency with 224 staff or 71% of a full complement. AFGE estimates that 83 more staff plan to leave through retirements, other jobs, or simply because they are unwilling to leave their homes for the Kansas City region. This leaves NIFA with 141 staff or 45% of the full complement. In addition, many employees who may relocate to Kansas City tell AFGE Local 3403 that they may only relocate short term until they find employment in their preferred localities.

“Moving a granting agency at the end of the fiscal year will have a detrimental impact on getting grant money out the door to our stakeholders,” Local 3403 Acting Vice President for NIFA Wesley Dean said. “Our staff, with all their years of experience, are leaving for other agencies. We should be focused on this, rather than hastily moving the agency.”

Working with scientists, researchers, educators, and organizations around the country, NIFA makes vital contributions to cutting edge federally funded science. NIFA programs advance the competitiveness of American agriculture, bolster the U.S. economy, enhance the safety of the nation’s food supply, improve the nutrition and well-being of American citizens, sustain natural resources and the environment, and build energy independence. NIFA is the federal partner of the nation’s Land-Grant University System, which includes the 1862 public universities; the 1890 historically black colleges and universities and Tuskegee University; and the 1994 tribal colleges and universities.

To see how NIFA funding impacts your area, you can visit this website which shows the number of grants made per each Congressional District.

Topline: The relocation crisis created by Secretary Perdue has resulted in catastrophic attrition at USDA’s top research agencies. This threatens Congressionally mandated scientific research, education, and extension related to agriculture and food systems, as well as the many Congressionally mandated formula funds that support state and county extension offices, and the 4-H program. Evidence suggests the relocation of these agencies is an attempt to hollow out and dismantle USDA science that helps farmers and protects our food supply.

Congress needs to provide oversight on the relocation immediately to ensure critical agriculture research is not irreparably damaged. Rehiring and retraining new employees could take years to achieve and even longer to reach current capacity. The low number of employees relocating to Kansas City highlights that relocation has been poorly incentivized for remaining in civil service.

The below table describes attrition rates for key personnel at NIFA. National Program Leaders are NIFA’s scientific experts, often well-established scientists in their field, who oversee the direction of new research programs, and develop and implement NIFA’s grant programs. Other program staff include scientific experts and staff who coordinate the granting process. The columns include the number of people who have left the agency since February 23 (which is the date AFGE began to track attrition), the number of people who will not make the move (retirees, declined to move, found other jobs, and refuse to move), and those who will move as a last resort if they cannot find other employment in the D.C. area before Sept. 30.

Table 1: Estimated NIFA attrition rates from the announcement of the relocation through Oct. 1, 2019.

Notes: Relocation first announced Aug. 9, 2018. The reassigned employees are NIFA employees that were reassigned or would have been reassigned had they remained at NIFA. Total includes all employees in each group, but does not include any staff expected to stay in the National Capital Region.