“The future of our planet is at stake,” Union Says as White House Guts EPA Worker Contract 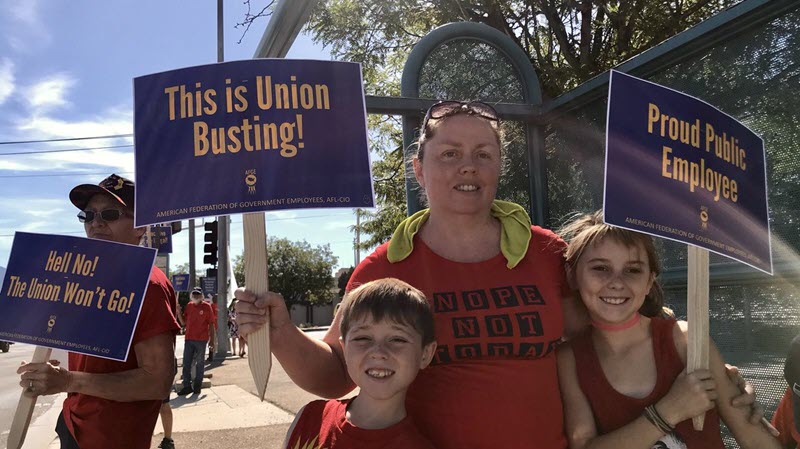 WASHINGTON – The Trump administration is undermining federal efforts to protect our environment by discarding the contract between the Environmental Protection Agency and its employee union and replacing it with an illegal edict, the American Federation of Government Employees said today.

“The 8,000 employees we represent at EPA are professional civil servants who have dedicated their lives to science and protecting the environment. By trampling on their rights, this administration is showing a blatant disregard not only for these workers but for the very mission of the EPA,” AFGE National President J. David Cox Sr. said.

On July 8, EPA management made the unlawful decision to replace the previously negotiated collective bargaining agreement between the agency and AFGE Council 238 with a management edict that demonstrates outright hostility to union rights, federal employees, and the mission of the EPA. The illegal edict:

“The engineers, scientists, environmental attorneys, and other experts we represent at EPA fight every day to ensure we have clean air and water, prosecute environmental crimes, clean up toxic waste sites, and combat the effects of climate change,” AFGE Council 238 President Gary Morton said. “The future of our planet is at stake, yet this administration is more interested in busting federal unions and punishing career employees than ensuring they have the tools to succeed.”

AFGE filed an unfair labor practice charge against the EPA on June 25 and is currently pursuing its options to fight the imposition of the management directive.

Many of the provisions being forced on EPA employees mirror those contained in three executive orders issued by the Trump administration last May that are on hold pending further legal challenges. Other agencies have similarly refused to bargain in good faith and have imposed portions of the executive orders on employees through illegal edicts, including the Education Department and National Park Service.

“The Trump administration has shown an outrageous pattern of trampling on federal employees’ rights and ignoring the law to dismantle decades of prior agreements between our union and previous administrations,” Cox said. “They are trying to destroy federal unions from the inside out, and if they succeed, then there will be no one to protect federal whistleblowers from retaliation, to fight discrimination and disparate treatment, or to prevent the politicization of the federal workforce. The stakes could not be higher.”