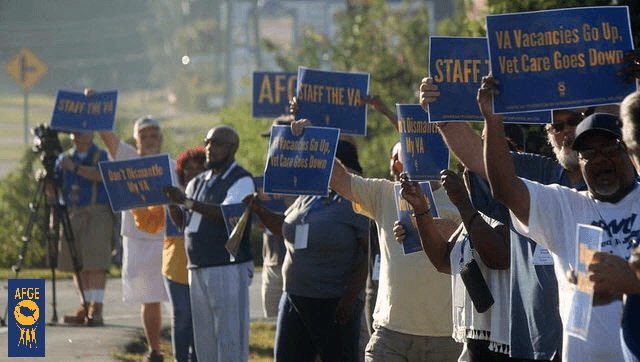 WASHINGTON – The country’s largest federal employee union filed a lawsuit in federal court seeking to block recent union-busting actions by the administration and the Department of Veterans Affairs.

“This year the president has launched several attacks against working people, with a heavy emphasis on targeting the women and men who have dedicated their lives to caring for our nation’s veterans,” said AFGE National President J. David Cox Sr., a VA nurse for more than 20 years. “From his now-illegal Executive Orders in May, to the recent decision by the VA to remove Title 38 workers from official time – President Trump has made it clear he doesn’t want doctors, nurses, dentists, and many others to have a voice in the workplace. And he’ll go to extreme lengths to silence them and bust their union.”

“Last week’s announcement that the VA was removing 430 workers from official time defies Congress by circumventing the Civil Service Reform Act of 1978 that established official time as necessary for workers and taxpayers alike,” added Cox. “This action is the latest overreach in their quest to bust unions and ensure that workers have no ability to blow the whistle or fight harassment, discrimination, and retaliation in the workplace.”

AFGE, which was the lead plaintiff in AFGE v. Trump, the successful lawsuit challenging the executive orders, has been locked in a battle with the administration for most of the year to protect the Congressionally-mandated official time granted to federal workers. AFGE has continued to cite the ways in which official time saves time, saves money, improves efficiency, and helps workers combat workplace discrimination and retaliation.

“Without official time, we never would have known about the VA waitlist scandal in 2014,” said AFGE National VA Council President Alma Lee. “Kathleen Dahl wouldn’t have been able to blow the whistle on a Legionnaires’ outbreak at her VA that killed six veterans and sickened 16 others. Dr. Michelle Washington wouldn’t have been allowed to testify before Congress about a shortage of doctors to treat troops returning from war with PTSD. But thanks to official time, Dr. Washington and Ms. Dahl’s stories were heard and lives were saved.”

“If the president and his administration get their way, workers will be intimated into silence and our veterans will suffer,” added Lee.

Under the Civil Service Reform Act of 1978 there are already statutory limits on official time. Last year at the VA, only 0.539 percent of employees used some sort of official time, costing just one-tenth of one percent of all the salaries and benefits paid to federal employees.

“The administration would have you believe that there is some rampant misuse of official time, but they can’t cite when or how,” said Cox. “And in reality, silencing these workers and the tens of thousands they represent will do nothing to increase access to care or help close the gap in vacancies plaguing the VA.”

“When President Trump was elected he said he wanted to help veterans receive greater access to the care they’ve earned,” said Cox. “But, from the day he took office and instituted his foolish hiring freeze, vacancies and wait times at the VA have risen. And instead of addressing the inability to properly hire and staff VA medical centers across the country, the president continues to try to silence employees and take away their rights at work.”

“We don’t relish having to go to the courts every time the administration oversteps and tries to trample on our rights, but we’re not going to back down. We will fight to ensure every employee has a voice in the workplace, and we will not stop fighting until those rights are protected,” he added.