Federal Agencies’ State of the Union is Understaffed

In late January or early February each year, the President of the United States gives a State of the Union address highlighting accomplishments in the past year and priorities for the year ahead. Understanding the state of our union requires understanding the state of federal agencies which serve as the backbone of our government and provide taxpayer services to the American people.

Despite an increasing workload, most federal agencies saw their workforces reduced during the first year of the Trump administration.

According to the Bureau of Labor Statistics, the government shed 16,000 employees in 2017. Due to hostility against the workforce, many employees left the government to work in the private sector. Many retired. Combined with a hiring freeze that’s still in effect at many agencies including the Bureau of Prisons and the State Department, and the administration’s intention to leave thousands of positions unfilled, government offices have been hollowed out. The administration’s job-killing agenda has a real-world impact on the American people who rely on important taxpayer services.

Here are a few examples of the state of our federal agencies: 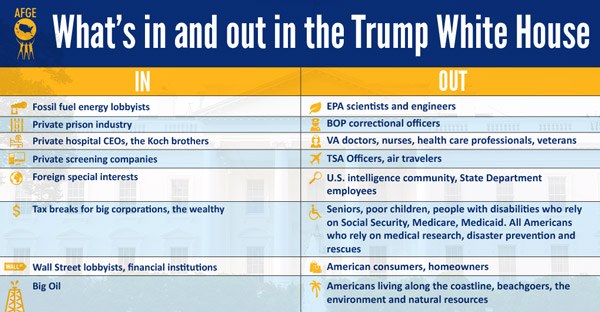 To pay for a new law giving corporations and the wealthy massive tax cuts, the administration has warned agencies to brace for even deeper cuts in 2019. It’s set to release its 2019 budget proposal on Feb. 12 with individual agencies’ long-term plans to slash the workforce. The president has so far made good on his campaign promise to “cut so much your head will spin."