April 8 is Equal Pay Day, the day that marks the day when women catch up to their male counterparts’ pay from the previous year.

Even though the pay gap between men and women has decreased since 1963 when women earned only 59 cents to every dollar earned by men, prompting the passage of the Equal Pay Act, women’s pay continue to lag behind today. In the private sector, the pay gap is close to 20 cents and wider among African American and Latina women.

It is always about the bottom line in the private sector. Companies care more about raking in profits and fattening CEO pockets than whether or not their workers can raise a family on a minimum wage without help of food stamps and other federal aids, paid for by the taxpayers. There was a huge uproar earlier this year when President Barack Obama signed an executive order raising the minimum wage to $10.10 an hour for federal contract workers. The current minimum wage is $7.25, and most businesses want to keep it that way.

This week Obama went one step further when he signed an executive order prohibiting federal contractors from retaliating against employees who discuss their compensation – an important step as many women don’t even know they earn less than men. He also issued a presidential memorandum directing the Labor Department to establish new regulations requiring federal contractors to submit compensation data including data by sex and race. 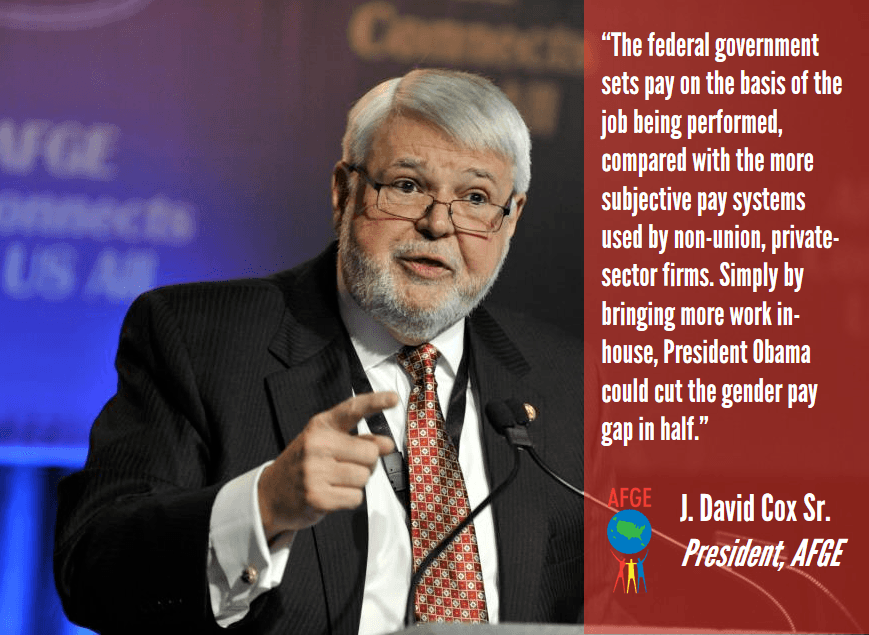 There’s a bill pending in Congress that would implement the executive order for other workers. The Paycheck Fairness Act would prohibit employers from retaliating against employees who share salary information and would make it easier for workers to challenge gender-based wage disparities. Corporations and the lawmakers they sponsor have come out in full force against the bill.

But really, the administration can stop the race to the bottom right now by replacing contracted workers with federal employees. The Defense Department is the agency that has outsourced more federal jobs than others. Its spending on contract services has doubled from $72 billion is 2000 to more than $150 billion today. Taxpayers are also on the hook for outrageous CEO pay that these federal contractors are allowed to reimburse -- $487,000 for a single employee. That’s more than double the salary earned by the vice president and Cabinet secretaries.