Leonard Mencio might have walked 500 miles through the corridors of Miami Airport trying to talk to Transportation Security Officers (TSOs) about joining AFGE. As a national organizer, it was hard to sign up members when the workers didn’t even want to talk to you or were scared of being seen talking to you.

That was 2003. TSA had just issued an order prohibiting collective bargaining at TSA. Workers were under the impression that they could not even join a union because supervisors told them they had no rights to a union.

Mencio and Jimmy Clifton, a national representative, had been at the airport just about every day and would constantly introduce themselves to TSOs. They would pay $200-$300 to reserve a conference room a few times a week to talk about the union. One or two people would show up at these meetings if they were lucky. Most of the time, the room was empty.

One day after three months, they struck up a conversation with a TSO who, to their complete surprise, told them he remembered AFGE and asked whether they were going to have a union meeting on the 7th floor. They happily confirmed that there would indeed be a meeting. After the TSO walked away, Mencio and Clifton hugged each other.

“It was the first time that someone acknowledged who we were and that they knew that we were going to have a meeting, which meant that our information was starting to get penetrated,” Mencio recounted. “It was the first time in three months that we had that type of exchange that we almost cried like little kids. We thought we broke through something finally here in Miami.”

Five years later in Washington, D.C., AFGE Attorney Chad Harris was in his office when he was asked to fly to Detroit immediately because five TSOs were about to get fired for failing an image test. The images that the TSOs were trained on were not the same images on the test.

Harris hadn’t prepared a bag as he wasn’t planning on leaving town. But he booked a flight to Detroit and went that day.

“Luckily I had a suit in my office. I ended up buying toiletries in the gift shop of the hotel,” Harris bemusedly recalled. The TSOs didn’t have collective bargaining rights, but AFGE tried to do everything we could to improve their working conditions. 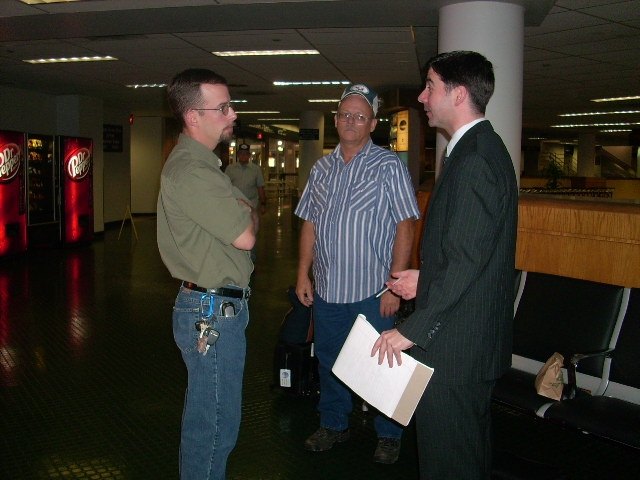 Harris and an AFGE national representative met with the officers to discuss the flawed test. Together they raised the issue with TSA and members of Congress.

“We were there to do whatever we could for them. We helped the employees,” added Harris.

TSA later admitted that the image test was flawed and that they would suspend and reform it.

AFGE did not prevail in the 2003 lawsuit we filed against TSA for prohibiting collective bargaining at the agency.

After it was clear TSOs would not get bargaining rights anytime soon, AFGE decided that we were going to act as if we already were the union for TSOs until they got collective bargaining rights. One of the first things we did in our organizing campaign was educate the workforce about the value of union representation.

Due to the scale of the campaign – it was the largest organizing campaign in recent history involving 44,000 TSOs in 450 airports across the country – AFGE formed a team called the AFGE/TSA Workgroup that included key staff from different departments. The workgroup met every two weeks to share information from the field and to decide the day-to-day direction of the campaign. The group would later prove instrumental to the success of the campaign due to its length and challenges that came with it.

AFGE also dramatically increased the number of staff working on the campaign, including 35 more project staff organizers and six attorneys. We had one national organizer assigned to each of the 30 major hub airports. To put this into perspective, the union rarely added more than one or two organizers a year.

But one of the first challenges we faced was access to the officers – they worked and hung out behind the security line inaccessible to the non-flying public.

Some organizers would become creative and buy one-way plane tickets to get past the screening areas and see TSOs in and around the terminals. They would hang out at food courts, airport bus stops, and parking lots to hand out flyers about the union. They would even ride the airport shuttles that took TSOs to and from the airport to talk to the officers.

Because of the access issue and the fact that TSOs were scattered around the country, AFGE heavily relied on technology to communicate with the employees. As most TSOs owned a cell phone, the union routinely connected with them via email, text messaging, and social media like Facebook, YouTube, and Twitter.

We also distributed a weekly e-newsletter, The TSO Voice, and a quarterly newsletter, The TSA Action Report, to keep TSOs in the loop about AFGE’s activities related to TSA in Washington D.C. and around the country. We had a webpage dedicated to all things TSA to which organizers routinely sent TSOs seeking information about workplace issues, legislation, victories, and others.

A big break in our organizing campaign came in 2007 when AFGE won a lawsuit in which the court ruled that Oakland Airport TSO John Gavello had the right to sue TSA for violation of his constitutional rights, including the rights of free speech and association. Gavello was fired for engaging in union activities in 2004.

Even though TSA did not allow TSOs the right to bargain collectively, the court made it clear that TSOs could join a union and that TSA could not interfere with the union’s effort to sign up members.

After the court ruling, AFGE kicked our organizing campaign in high gear. The question of unionization at TSA was resolved and membership within AFGE skyrocketed.

Organizers, along with AFGE attorneys and other staff, would regularly meet with the officers to listen to their workplace issues and find ways to help them. For Lunch and Learns and meetings about the union, they would set those up at airport conference rooms and inside airport venues like TGI Fridays and other eateries.

“We found out that they had a procedure that they could argue disciplinary action,” Mencio added. “It wasn’t until we started representing them that we started getting noticed.”

The mountain was high, but AFGE and TSOs finally saw a path that could lead us to the top.

“There is more than one way up the mountain,” noted then AFGE Membership and Organization Director Sharon Pinnock, who headed the union’s TSA organizing campaign, in a 2011 paper [1] she wrote for The Journal of Labor and Society.

Even though TSOs had no collective bargaining rights, AFGE tried to protect the employees in different ways. AFGE attorneys would challenge everything they could, using them as test cases to establish limited but enforceable rights.

Despite the 2007 court ruling, TSA was still very much against unionization at the agency. It insisted that the law creating the agency allowed TSA to ignore any law other federal agencies were required to follow.

TSA, for example, didn’t allow workers to file unfair labor practices against the agency or appeal their removal to a neutral third party. TSA fired workers for very little and often ruled against them when the union appealed the unfair removals to TSA’s internal Disciplinary Review Board (DRB). TSOs were not protected if they blew the whistle on fraud or wrongdoing.

TSOs were among the lowest paid federal workers, and TSA’s own pay system called Performance and Accountability Standard System (PASS) exacerbated the problem by failing to fairly reward the officers. One of the problems was the performance evaluation system was highly subjective and not properly conducted. TSOs, for example, were rated by supervisors who did not work with them. TSA also relied on artificial testing, which led to TSOs being tested on different machines than they actually used to do the work.

A big component of PASS was the Image Mastery Assessment (IMA), an image test that turned out to be flawed because TSOs were not tested on the images they were trained on, and they got fired for failing these tests. Making matters worse, the officers had no rights to appeal an unfair PASS evaluation to an objective third party.

TSOs across the country reported not being able to complete required training because of understaffing at their airports. TSA had failed to hire enough workers, and because of poor working conditions, TSOs left soon after they started.

TSA was also plagued with health and safety issues. TSOs reported having back pain from standing and lifting and rashes from formaldehyde from the uniform. They reported vision problems from the UV flashlight used to look at IDs and raised concerns about being exposed to radiation from the x-ray machines, especially because TSA refused to give them dosimeters to monitor their exposures.

AFGE raised these issues with TSA and Congress. The agency, however, fought TSOs’ efforts to file workers’ compensation claims for these on-the-job injuries.

“The first thing that struck me was that they were not expecting to follow any law,” observed AFGE Health and Safety Specialist Milly Rodriguez, who was part of the TSA Work Group. “They thought they were not covered by [the Occupational Safety and Health Administration] and they were. I confirmed that with OSHA.” 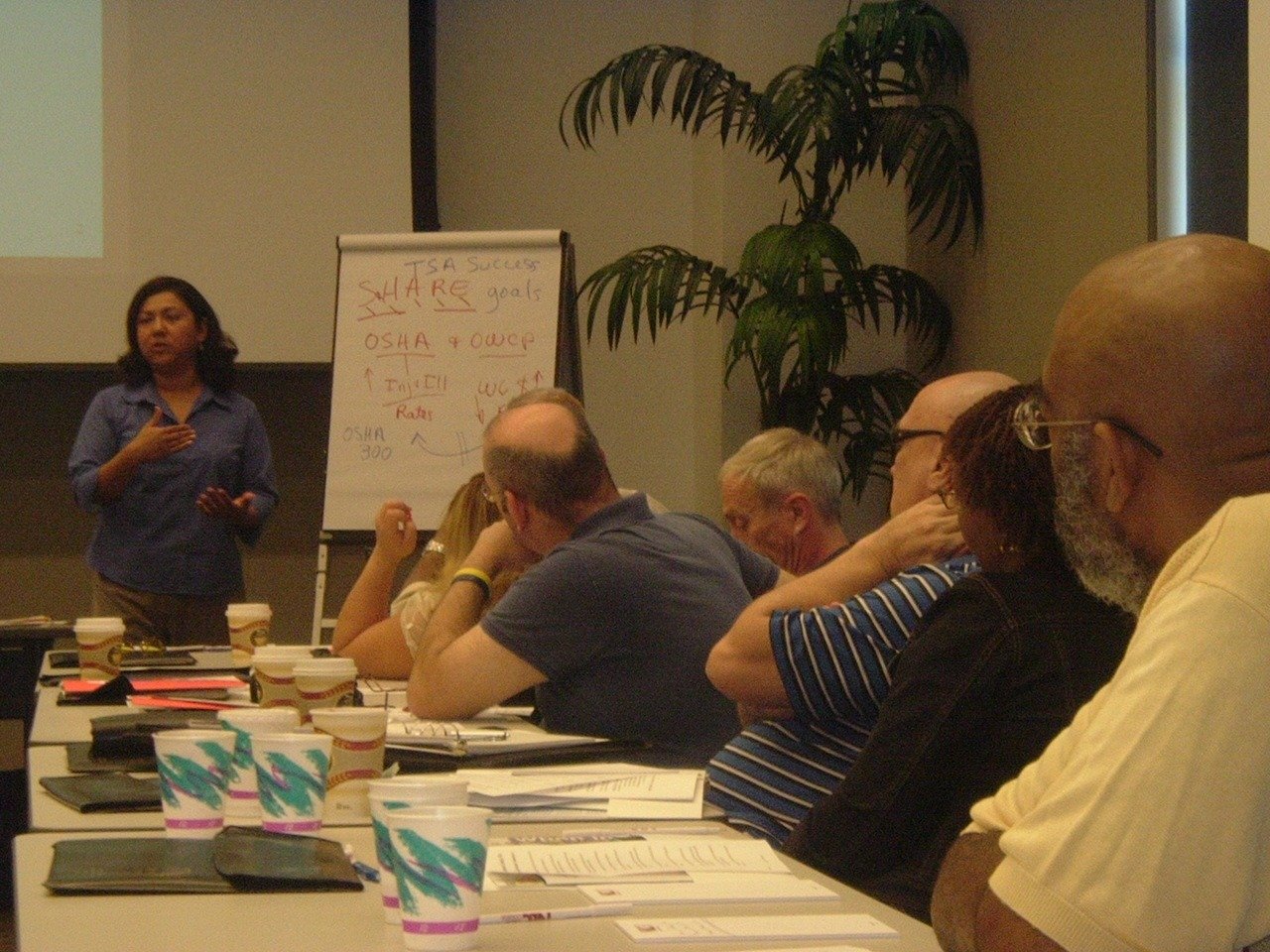 “Back then, AFGE didn’t have anybody at the national office working on workers’ comp,” Rodriguez continued. “Over the course of the years, I had to develop a new program, write a manual, and design classes on workers’ comp. Now these classes and program are for everyone. But it began in the middle of the TSA campaign. I had to develop a program to help injured TSOs and to train new union activists.”

Against this backdrop, it was remarkable that the union was able to win anything at all. But we did.

In March 2008, for example, then TSA Administrator Kip Hawley issued a memo admitting that TSA image tests, which measured TSOs’ abilities to detect certain images on screening devices, were flawed and would be reformed. The following day, TSA revamped PASS, admitting that it had become “far too complicated” and distracting.

Also under AFGE pressure, TSA entered into an agreement with the Merit Systems Protection Board (MSPB) under which TSOs would be allowed to appeal whistleblower cases to the MSPB.

After intense pressure by AFGE, TSA at Dallas-Ft. Worth dropped its controversial leave policy that penalized TSOs for unscheduled leave.

The list goes on and on. Our victories would help shape TSA policy in the early days and for years to come.

“Without the union, TSOs would not have the rights they have now,” said Harris, who was also part of the TSA Work Group. “When they first started, they had so few rights. Because of AFGE, all of that changed.”

At the end of 2008, AFGE celebrated good news when Barack Obama was elected President of the United States. Obama had promised AFGE that if elected, he would grant collective bargaining rights to TSOs.

But our path to become the workforce’s official union would prove to be bumpier than we had hoped for.

Missed our 1st and 2nd segments of the series?

Check them out here:

#2: The Road to Title 5: In the Beginning, There Was No Light